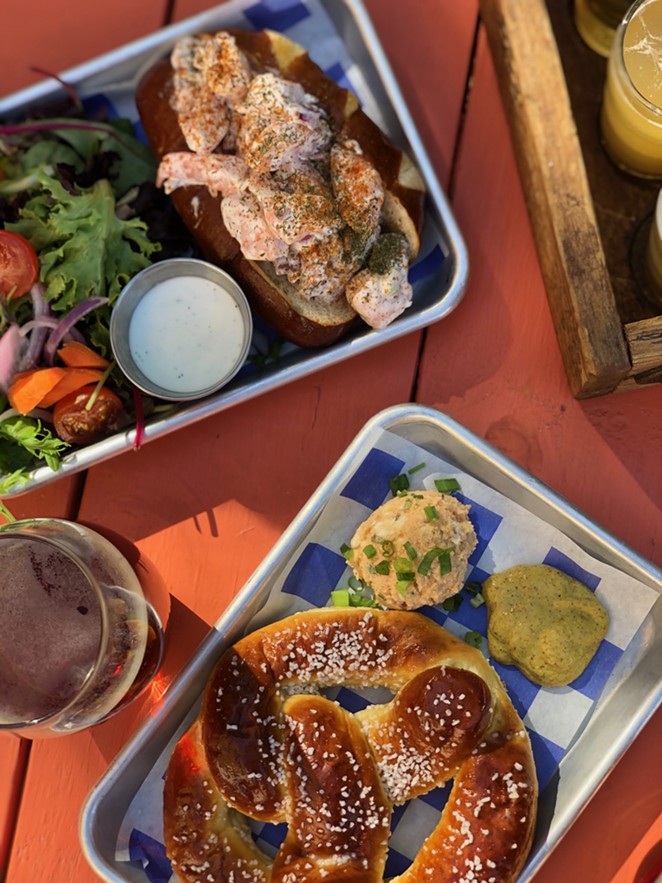 San Antonio’s Künstler Brewing has won praise for its creative and expertly crafted beers, racking up multiple awards since its 2017 launch, including silver medals at the Great American Beer Festival.

So, the beer’s good — the pros have proclaimed it — but that’s just part of the draw at the Lone Star Arts District spot, which also offers brunch, lunch and dinner.

To see if the bill of fare made a worthy match to its extensive list of house-brewed beer, I took advantage of the Oktoberfest-worthy weather to post up in Künstler’s biergarten with culinarily minded cohorts to explore its dining options.

On past visits, the food wasn’t the primary reason for my visit, and it didn’t make much of an impression. Pleasantly complex, expertly brewed and graciously priced, Künstler’s beers were always the main reason I ended up there.

But with a revived outlook — and the prospect of picking up a crowler of Confident Bitch, the brewery’s complex and revered American Brown Ale — we set out to taste as much of the menu as we could. Between pints, of course.

The visit started with the fried Brussels sprouts, served with bacon, chopped cashews and lemon aioli. The flash-fried mini cabbages were easily the highlight of the meal, and they had the entire table debating about the finer points of their preparation. Home cooks know there’s a fine line between uncomfortably bitter Brussels and edible ones. Whoever’s manning the fryer at Künstler knows exactly where that line lies.

Between the fresh-baked pretzel bun and its cargo of beautifully cooked seafood, the shrimp roll was another high point. Prepared New England-style, the loaded sandwich featured the crustaceans tossed in an aioli full of finely diced, raw red onion and chopped celery. The bun was generously buttered and toasted, even if the filling needed more acid, salt and pepper. The lack of seasoning didn’t stop me from going back for multiple forkfuls of the delightfully plump shrimp, however.

The soup of the day, billed as Mushroom Miso, was confusing, to say the least. The texture was more like a chowder, and the potato-heavy dish tasted more of bacon and corn starch slurry than either of its title ingredients.

You can’t visit a German brewery without ordering a pretzel, and Künstler’s certainly scratches that itch. We chose pimento cheese for dressing the twisty baked offering and were surprised at the overpowering flavor of blue cheese. If not for the color, you wouldn’t be able to tell the spread was, in fact, pimento cheese. Indeed, blue cheese turned out to be a prominent flavor on more than one sampled dish.

On that note, the single-patty Künstler burger, served on Saturdays, includes obatzda — a Bavarian spread that Künstler prepares with both blue and brie cheeses. It also comes with tomato, apple and onion jam and arugula a pretzel bun. The jam, delightful on its own, was overwhelmed by the obatzda’s blue cheese notes. Somehow, the patty itself was both under- and overcooked. The absence of any caramelization on the exterior led me to believe the inside would have a juicy, slightly pink center, but no dice. The ground beef was grey all the way through.

The burger order was pepped up, however, by a refreshing side of potato salad, which I enjoyed immensely. Bright bits of chopped scallion and fork-tender chunks of red potato mingled for a hearty accompaniment. The dish differed from a traditional kartoffelsalat thanks to the presence of shredded cheese throughout.

And the beer? As usual, all stellar.

Overall, it was worth devoting serious attention to the offerings from Künstler’s kitchen. It can sometimes be too easy to write off a spot off as a one-trick pony. Athough, with Künstler’s multi-award-winning beer track record, that pony still knows one hell of a trick.

While execution issues dragged down a few of the dishes we sampled, there’s something to be said for a brewery that’s taking bold steps to expand its offerings from those on the draft rail. I’ll keep making the trek to the south-of-downtown beer oasis, and I’ll keep exploring the menu. There’s plenty from the kitchen to pique my interest, and hell, I’ll already be there for the beer.

The skinny: This south-of-downtown brewpub excelled at serving up award-winning brews since 2017, and the food adds an extra element to the experience. Like it says above the door: Kunst und Bier gibt es allhier, “Art and Beer: Get it here.” Künstler takes the artistry of craft brewing seriously, and that alone should encourage adventurous eaters to explore the brewery’s bill of fare.