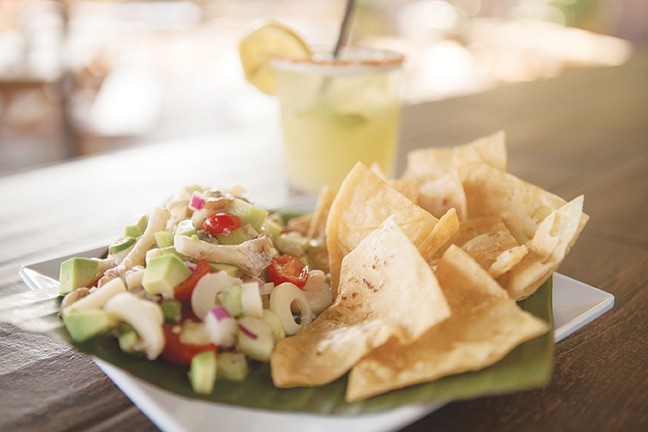 Over the years, I've probably given bar owner Danny Delgado more money than I have to all my landlords combined. Behind inspired, rowdy spots like Hi-Tones, Faust and Phantom Room, Delgado has a magic formula for making his joints come alive — an equation of dangerously cheap drinks, understated décor and a no-line, smother-the-bartop policy that rewards a townie's knowledge (or at least repeat visits).

So, teaming up with the green thumb of chef Rebel Mariposa (née Rebecca Lopez) for La Botánica has been a blessing for the vegans and vegetable-minded in San Antonio. Inside the Tiffany-blue building, a vibrant, short menu of vegan eats and a full bar awaits the man-bunned, the drop-crotched and whatever else substitutes for fashionable these days.

Mariposa made her name around town as the head of Rebel Eats, a catering, educational and events collective finding power in "plant-based" food. At La Botánica, Mariposa has found a commercial outlet while maintaining the creativity of the Rebel Eats mission.

The restaurant serves each dish on a bed of banana leaves, a refreshing presentation. The small, revolving menu of items $10 or less suggests a refusal to stay still, as does Mariposa herself. Each time I visited, she's on the hustle. With the kitchen open until almost 2 a.m., I can't imagine she has too much time to sleep anymore, though that hasn't had any impact on the spot's countenance.

La Botánica's Mexican theme definitely lends itself to meatlessness — too often, vegetarian options suffer from comparing the veracity of a tofu substitute to a fish and chips combo. Still, this restaurant can fake it quite well. Their ceviche Huehuecoyotl is a delight, with lime-marinated oyster mushrooms and hearts of palm delivering the weight of the meal. Plump grape tomatoes and garnishes of red onion and avocado seal the item's status at the top of the menu.

For those frustrated by veggie fare, coming away hungry from meatless dinners, try the lightly fried empanadas. Out of four empanada renditions, I tried the papas version, a dish that would be lost without its sweet, oniony salsa. Basking in a sweet, fried glow, the three creamy, stuffed bites paired well with the side of no-frills frijoles negros.

Despite the plants-only policy, La Botánica participates in the San Antonio tradition of Sunday-only barbacoa. The dish is crafted from jackfruit, Earth's largest tree fruit. Native to Southeast Asia, the monstrous thing can weight up to 100 pounds and looks something like a perforated, oversized pear.

Served in three flour tortillas and loaded with black beans, avocado and lively roasted salsa, your local taco house may be in danger of losing your weekend patronage. On the side, small cubes of watermelon and chili salt add to the lightness of the meal — a claim that traditional barbacoa could never make.

So far, none of La Botánica dishes I've encountered have had much spice. With great restraint, Mariposa seems to be interested in letting the veggies speak for themselves. But if you're craving some kick, there's a little table by the bar that offers all the hot sauces your tongue can handle.

Or, better yet, try the Tequila Piña, one of the bar's signature $7.50 cocktails. With jalapeño muddled directly in the tequila, the pineapple drink hits pretty hard if you don't ask the bartender to hold back on spice.

Weeknights are a great time to eat your vegetables, sip on a cocktail or one of 20 beer options and enjoy the peculiarities on the wall. In low light and bright paint, La Botánica observes the occult-ish, faith-healing onda of the stores from which it take its name. With loads of incense, cacti accents, odd-shaped empty bottles and loads of novena candles, La Botanica makes a solid Mexican goods store look like an airport tourist shop.

On weekends, it's a little more packed. In the dirty red neon glow over the patio, people danced to "El Chico Del Apartamento 512," loud enough to drown out the dad rock coming from across the street. With Lone Star and Pearl at a cool $2, nighttime is the right time to recall that this is, in part, a Delgado operation, where the light is neon, the drinks are cheap and the music is good.