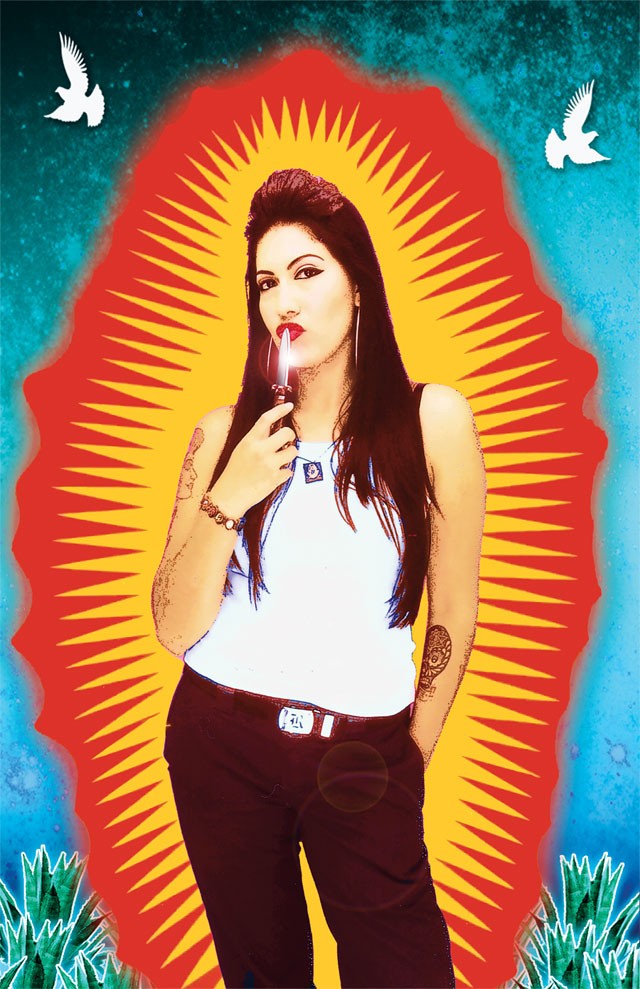 Please don’t be intimidated by La Chola, whose real name is Mayra “Breezy” Ramírez. She lives in the Bay area, but has become an instant San Antonio icon thanks to photographer Rio Yañez and designer El Robótico, who is no other than Roberto Livar, leader of Bombasta.

The three of them together produced a killer poster announcing Barrio Massive, “a night of electro cumbia and Barrio Big-Band sounds,” taking place Friday at Sam’s Burger Joint.

For Livar, every Bombasta show is the greatest show on Earth, and this time he could be right. Besides his band, the show will feature two supergroups: the DJ team of Peligrosa All Stars (Orion, Manolo Black, Hobo D, Págame, Sonora, 4th Wall, and DJ Dus), and “cumbia krunk” experts Master Blaster Sound System, featuring Austin’s Brian Ramos (Grupo Fantasma, Charanga Cakewalk) and Corpus Christi’s DJ Dus and bassist Cecy Treviño (formerly with La Conquista, a kick-ass cumbia-pop group that used to be produced by Abraham Quintanilla (Selena’s dad).

“It’s gonna be a really good night,” said Livar. “I’m going all out on this one, trying to double up and finally finish this damn CD by then too.”

The “damn CD” is Bombasta’s new album, Con Safos (or C/S, “with respect”), so expect a few pre-releases floating around Sam’s, and some new Bombasta songs during the concert.