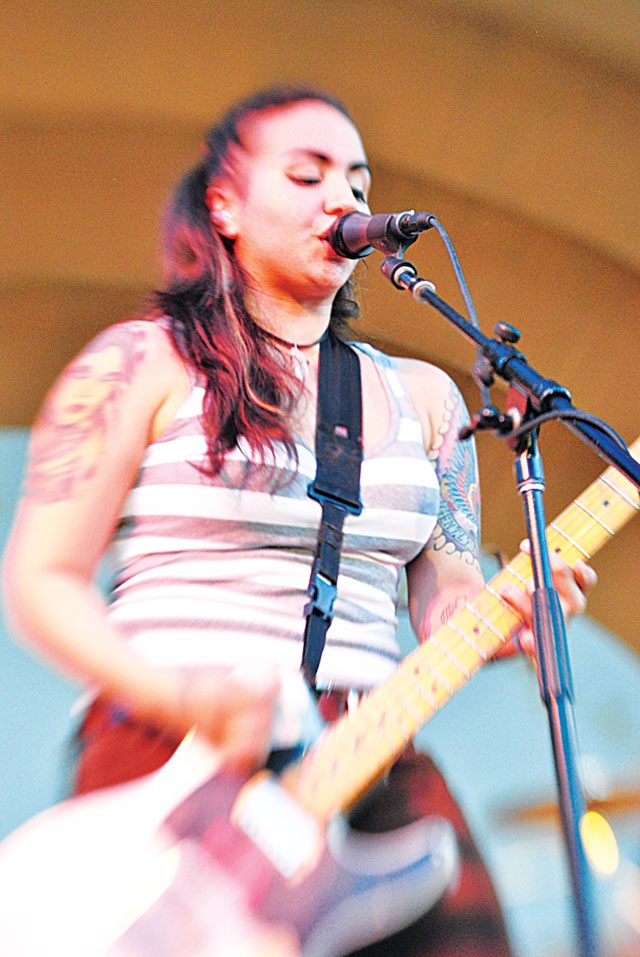 Girl in a Coma

Blame it on the L.A. traffic, but it’s actually kind of cool arriving just as Girl in a Coma are starting up, taking in the full crowd, walking past the vendors’ booths. It’s a free show, but the atmosphere is like a side stage at Austin City Limits, the just-about-to-break-big band you somehow didn’t realize that many people were already hip to. Hearing a park full of West Coasters singing along to “Static Mind” and “El Monte” feels absolutely right.

“We aren’t sure what the rules are here,” guitarist Nina Diaz says early on, “but this is a rock show, right?”

Everyone screams and scoots closer to the stage. The band plays that song from the Machete soundtrack (“Yo oigo”), then covers by Selena (“Si una vez”) and Patsy Cline (“Walkin’ After Midnight”). They’re great, and everyone knows it (Nina is maybe the first singer since k.d. lang who could make a punk cover of “Walkin’…” that doesn’t sound the least bit ironic). “Say” makes it clear the lockstep rhythm bassist Jenn Alva and drummer Phanie Diaz fall into is the product of the garage and stage, not the studio. “Their Cell” gives Nina the chance to show she can pull almost as much melodic expression from her guitar as that voice of hers.

“Adjust,” a new song from a yet-to-be released album, is surprisingly low-end heavy and angry, and it digs down into a dark place it never quite climbs out of. A few other new songs have enough bounce and bah-bahs to make up for it, though. The new songs show an interesting evolution, but the older songs — each one’s name met with a huge cheer — prove they’ve always had this and were just waiting for the rest of the world to figure it out. It looks like they’re coming around. The old comparisons still apply, but the way Nina delivers the line “I’ll only apologize when I’m wrong” in “Clumsy Sky” could be a case study in the difference between being heavily influenced by the Smiths and getting invited to open for Morrissey. The only question remaining by encore time is just how far hard work and talent can take a real-deal rock ’n’ roll power trio in 2011.

Stay tuned, San Antonio. You’ve got the best seats in the house, and there’s a reason we never shut up about this group.