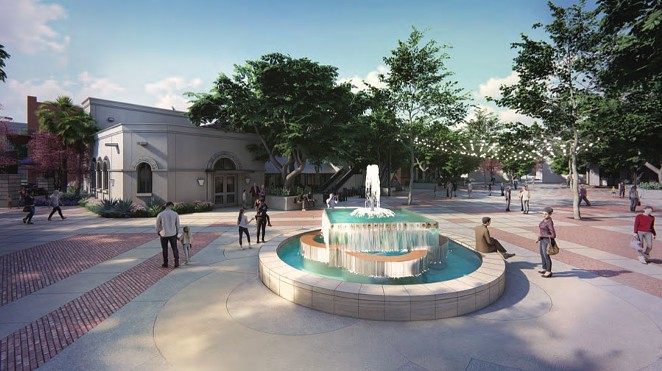 The Maverick Plaza at La Villita makeover continues to evolve.

The $12 million project is being lead by local chef Johnny Hernandez, whose Grupo La Gloria signed a 49-year lease from the City of San Antonio on the plaza in May 2018.

The addition of new Mexican, German and Spanish restaurants on the plaza, the German eatery also including a microbrewery, spearhead the effort. Many of the non-historic physical structures, such as the limestone walls that face East Nueva and South Alamo streets and the gates separating the plaza from the rest of La Villita, will be removed to make the plaza more porous. The updated plans, which were scheduled to be heard at the Historic and Design Review Commission (HDRC) meeting yesterday, but have been postponed until Aug. 19, also include the demolition of the fountain at the plaza’s center and a new one being built closer to South Alamo as an element inviting pedestrians in.

In 2017, the city sought bids for the rehabilitation of Maverick Plaza, which has served as one of downtown’s premier event spaces while being dormant most days of the year. Hernandez’ plan to convert the plaza into San Antonio’s next culinary destination was ultimately selected by the City Council.

Hernandez’s company is footing most of the bill, contributing $7.6 million while the city chips in $4.4 million in Inner City Tax Increment Reinvestment Zone revenue.

According to the city, construction is scheduled to begin in November, and be completed November 2021. 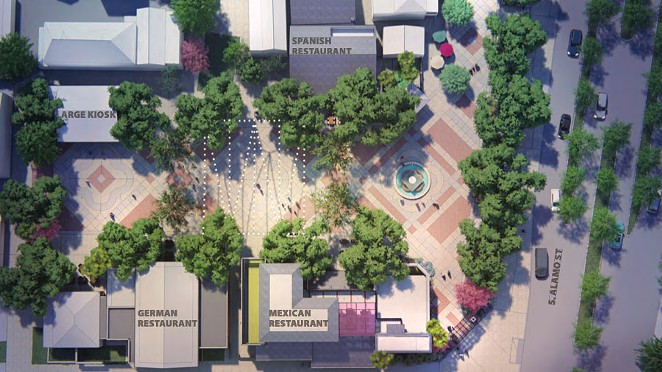 Hernandez’s Mexican restaurant will be built anew and made to look like a hacienda. “Tacos will definitely be on our menu,” Hernandez said in a 2018 interview with the Heron.

Some Fiesta-goers interviewed by the Heron about the plans were concerned restaurant patios would encroach on Maverick Plaza’s current open space footprint. The new renderings appear to show the footprint enlarged by extending the plaza to the tree planters that abut South Alamo, while knocking out portions of the planters as to better connect La Villita to South Alamo to Hemisfair.

It’s unclear if the move will expand the plaza’s open space. An interview request sent to Mark Navarro, principal at Fisher Heck Architects, which is producing the plans in partnership with MP Studios Landscape Architects, was not granted. In an email, Navarro said the team is reviewing community input and will make “any modification prior to our HDRC meeting to make sure we are listening and considering our stakeholders.”

Gateway-like entries would also be built on Villita Street and on the corner of East Nueva and South Alamo.

Other changes include removing seven of the 29 trees on the plaza and along Alamo, while adding some new trees; keeping parts of the existing tree planter wall on South Alamo; removing and salvaging the paving on King Philip V Street within La Villita; installing new lighting throughout the plaza; constructing a demonstration kitchen and a permanent food booth, and two smaller mobile food kiosks; and relocating the Maury Maverick statue from its current position on South Alamo to a location on the plaza’s north side.

The project is supposed to dovetail with the $9 million reconstruction of South Alamo, a project of the last city bond program. 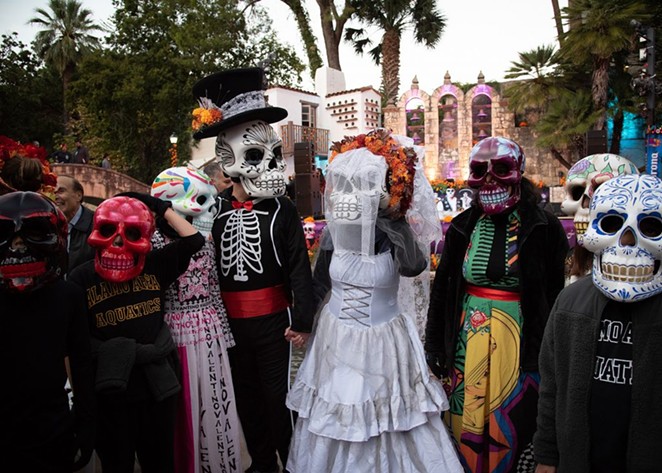 Under the lease agreement, Grupo La Gloria’s rent starts at $100,000 a year, which funds the plaza’s maintenance and programming.

The agreement also gives Grupo La Gloria the power to close the plaza and Arneson River Theatre eight calendar days of the year for events. The first of those events was the new Day of the Dead San Antonio series, which had the financial and logistical backing of the City of San Antonio—much to the ire of smaller cultural groups who had been growing their Dia de los Muertos celebrations at the grassroots level for many years.

During the last A Night in Old San Antonio (NIOSA) held in 2019, Fiesta-goers had mixed reaction to the Maverick Plaza makeover. One attendee said the plans would squeeze out many of the events Maverick Plaza has hosted in recent years, while another attendee said events like NIOSA have outgrown the space and should be expanded to Hemisfair across the street.