Lackluster DJ Aside, Aztec Lounge Has Plenty of Potential 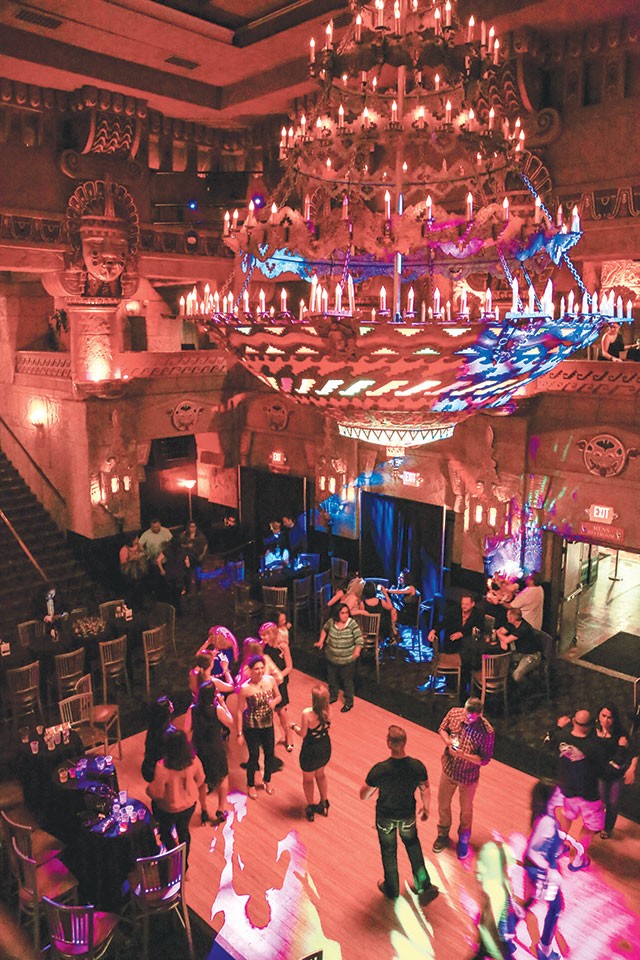 Great music, affordable drinks, classy décor, non-dangerous people, Mesoamerican religious icons: a short resume of the things I hope for at night clubs. The Aztec Lounge, just opened at the beginning of this year in the historic Aztec Theatre, doesn’t quite hit all those marks, but it makes a fair attempt. Until now, the Aztec Lounge has only been open on Saturdays, First Fridays and for assorted special events and concerts (see their calendar online). Starting in April, however, the club will be open from 9 p.m. to 2 a.m. on both Fridays and Saturdays every week. Cover ranges between $5 and $10 (credit cards accepted), depending on how late you arrive and/or how busy the club is. On First Fridays, pub runners get in free.

At 10:30 p.m. on a recent Saturday, the crowd at the Aztec was still pretty light—one large group of women dominated the dance floor while a few pairs of naively optimistic, Ed Hardy-clad dudes looked on. But by 11:30 p.m., the dance floor began to fill up with couples, smaller groups and a handful of passersby who, perhaps having left a wedding reception or other formal event, were lured into the Aztec by the thumping bass and short line to get in.

The music, while loud, leaves something to be desired. Spinning a mix of Top 40, EDM and somewhat antiquated Spanish-language hits that even gueros can sing along to, the DJ personally offended me the most with a dance remix of Bon Jovi’s “Livin’ on a Prayer.” People were dancing, sure—mostly cougars and a fist-pumping bro or two earlier in the night; a bachelorette party and lots of couples later on—but, as my Aztec accomplice said: “You can give the people what they want, but sometimes they don’t know what they should want.” If it’s a DJ’s job to teach us what’s good, on this count, the Aztec DJ failed.

Without a doubt, the best thing the lounge has going for it is its setting; the Aztec Theatre is truly a striking venue. A grandiose chandelier hangs above the dance floor, illuminated in rainbow colors, and a giant, circular Aztec calendar adorns one wall, while the humongous faces of Aztec gods cast judgment on the stanky legs of revelers below.

The club has two bars on the first floor inside the theater and two more upstairs, though those only appear to be used on the busiest of nights. Inside the expansive, 12,000-square-foot space, more than a dozen two-top tables encircle the downstairs dance floor. Upstairs, more tables dot the perimeter of the mezzanine, which wraps around the inside of the building and yields prime people-watching views with abundant seating and plenty of space for lingering. A small VIP area with couches is also found upstairs, just across the balcony from the box where the DJ spins his questionable jams and, to his credit, gratifyingly returns the “you the man!” finger points of enthusiastic dancers below.

On both floors, “reserved” signs adorn about a quarter of the tables, saved for patrons who ordered bottle service (the four or five choices each of vodka, tequila, whiskey and champagne bottles, as well as combo packages of any of the previous plus beers, run from $175 to $500), or those who simply called ahead and arrived before 11 p.m.

Unobtrusive but quietly visible security patrolled the second floor, which wasn’t an unwelcome thing, what with the nooks and crannies of the mez. At one point, I noticed an ambulatory light-up tchotchke vendor, because, San Antonio.

Drink specials from the bar vary every night, but when I paid my visit, wells and three varieties of Karbach beer were going for $4 during the first half of the evening. The beer and liquor selection is standard, with Macallan rounding out the upper end of the spectrum at $12. The friendly ’tenders were happy to chat and pleased to mix up all sorts of instant-hangover inducing shots in the $7 to $9 range, including the Purple Gecko, with tequila, raspberry, Blue Curaçao and salt on the rim ,and the Tokyo Typhoon featuring Malibu, Midori, more Blue Curaçao and pineapple. (The Typhoon was a bit better than the vaguely cough syrup-reminiscent Gecko, FYI, but my shot recommendation remains straight tequila.)

Overall, the Aztec has potential to be a viable downtown dance destination. It’s housed in a really rad-looking and historic space, has a stage for concerts, boasts reasonable club-drink options and prices, charges cheap entry and—most importantly—it’s not fucking Pat O’s.