Lady Gaga's Austin Show Hit Us Right in the Feels

“You’ve had a tough year, Texas,” said Lady Gaga, midway through her performance at the Frank Erwin Center in Austin during her Joanne World Tour last night.


Mother Monster herself put on probably one of the most insane live shows I’ve ever seen in my life (which is saying something since I sort of review concerts for a living), but it wasn’t the floating stages, pulsing LED lights, costume changes and choreography that hit me right in the feels – it was her message; a message of hope, endurance, struggle and pain – something any human on the planet could relate to. But with devastation of Hurricane Harvey and the tragedy of Sutherland Springs, her words hit hope in a very specific way that only us Texans could really understand last night.


Throughout the two hour performance of about 18 bangers and ballads – everything from “Diamond Heart” from her latest album Joanne to “Poker Face” from her 2008 debut album The Fame – the singer would stop and speak to the crowd saying stuff like “Do you know how much I love you?” and “All I do is think about how I can be better for you through the music, through the message.”


OK, to be honest, I wasn’t even that big of a fan of hers ‘til this last album Joanne (if someone wants to revoke my queer card, that’s fine, I’m just trying to be vulnerable here), but watching the sheer physical endurance of her dancing and singing (hitting every note) live throughout her set was just another example of why Gaga is iconic. 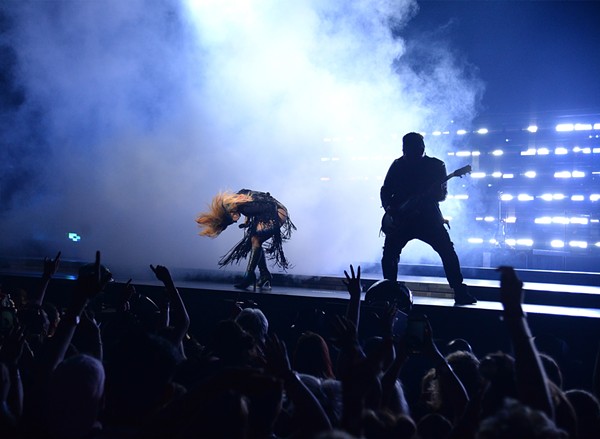 Between songs, Lady Gaga noticed a fan holding a painting in the crowd and stopped the show to reach down and take the gift: a painting of Gaga with her friend Sonja, who Gaga said she used to work with.


"She's from Texas and she was really strong. And the other night was the first time I've been to Houston since she passed away," a choked up Lady Gaga said "So if I'm being really honest, I had a real introspective and difficult couple of days missing my girlfriend." The pop star continued “...but she was strong, I tell you, way stronger than me – I know that she's here with me right now, and I know she would want me to dry my tears and get on with the show, because that's just who she was," she said. "So Sonja, girl, I thought about you all day, and I think about you every day, and this one's for you."

gaga, seeing you cry for your best friend in my hometown houston tx the other night changed everything. you have been my only friend on so many nights when i felt completely friendless. i got home and just had to paint about it. 🌈#JOANNEWORLDTOURAUSTIN #ladygaga @ladygaga pic.twitter.com/tkDdzLlRXJ

If you weren’t already crying from the way Gaga was slaying the audience, you were crying then.


Speaking of crying and emotions in general, let’s talk about the vibe in the arena: even just walking to our seats before the show, you could hear people complimenting each other's costumes – a range of drag, club kid and chic freak – naturally. That sense of camaraderie and family was heightened as the entire audience danced and sobbed as Gaga tugged on our heart strings and forced us to feel something.


If you were at the show last night and weren’t ready to have a tangible emotional experience, there’s a good chance you could’ve gone into shock. It was that heavy. I myself might need to talk this out with someone after, writing this actually is helping me sort through all my emotions (I'm not still crying – yes I am). 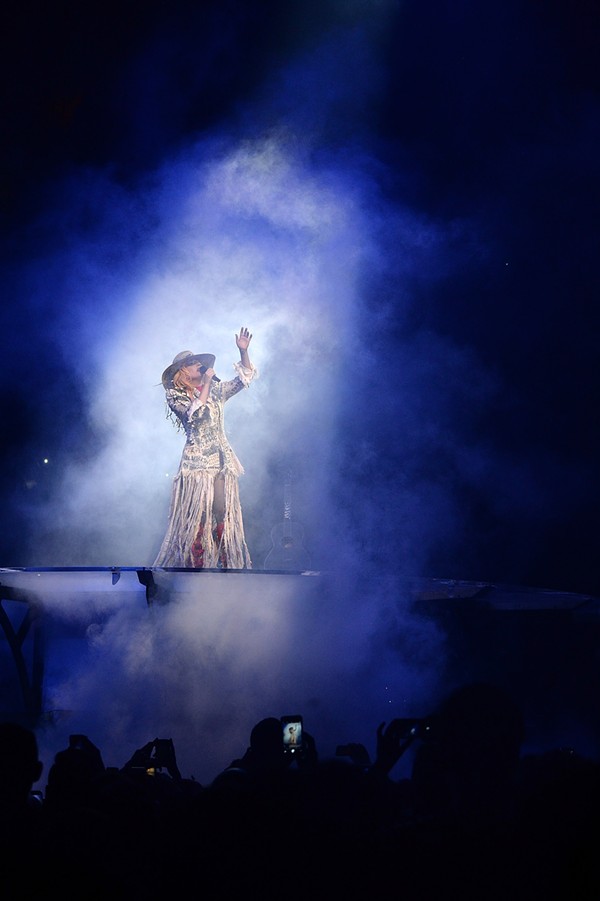 Before closing with “Joanne,” Gaga says to the audience “thanks for letting me borrow your hat, Texas” referring to the now iconic pink cowboy hat she’s sporting on the cover of the eponymous album.


Lady Gaga’s performance felt like a good friend coming to visit. You know, that friend that’s a little weird and crazy but loves the heck out of you and encourages you to love yourself. And from how much she spoke about our beloved Lone Star State, it’s safe to say Lady Gaga loves the heck out of Texas too.