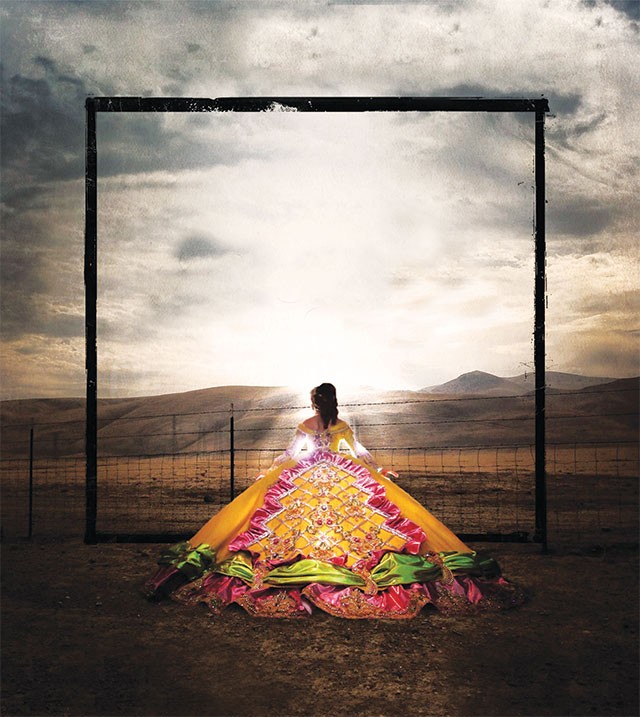 “Laredo is mostly Mexican-American, and here we are celebrating George Washington’s birthday. It’s kind of crazy. Why do we do this?” —Laura Garza Hovel

At the end of the Mexican-American War in 1848, Texas and several other full or partial territories became part of the U.S.A. When Mexico’s Nuevo Laredo was founded on May 15 of that year by 17 Mexican families who had been living in Laredo, they disinterred their dead, crossed the border and buried them in Mexican territory. Fast-forward 166 years later, and Laredoans from both sides of the border celebrate George Washington’s birthday with a lavish, surreal and frivolous Colonial ballroom dance in which families “present” girls to America’s first president.

That and many other questions are skillfully raised by Ibarra. Instead of taking sides, she was smart enough to simply let the camera show the three main aspects of this story: the dominating conservativism of the mostly well-to-do organizers (dress designer Linda Leyendecker Gutiérrez proudly remembers the time when the Society of Martha Washington committee“was invited to the White House by our lovely president George W. Bush, who we all love in Texas”), skeptical academics who question the spirit behind the celebration (most notably Saldaña and former University of Texas—San Antonio professor Norma Cantú) and the one thing everyone agrees on—the fact that, whatever reservations one may have, the celebration has turned into a unique Mexican and American hybrid.

“It always seemed like high border surrealism to me, carnivalesque, performing Yankee hegemony in such an over-the-top manner it becomes popular satire,” author and professor John Phillip Santos told the Current.

The first George Washington Celebration took place in Laredo in 1898 as a sort of minstrel show by Anglo migrants who staged battles in which the Indians beat the Mexicans. In time, the celebration became Mexicanized, partly due to the fact that Mexicans had to find a way to establish their “whiteness” in the midst of a wave of killings, lynchings and land theft.

“But [the Anglos looked] at these Mexicans dressed like George and Martha Washington and [they went], ‘Oh, they’re OK,’” said Saldaña.

“I can understand how some folks might be horrified [by Las Marthas],” former UTSA professor Norma Cantú told the Current. Now with the University of Missouri—Kansas City, she’s one of the talking heads featured in Las Marthas. “Perhaps studying fiestas has given me a different lens and I can understand a community’s needs for celebrations. San Antonio has Fiesta—to honor the defeat of the Mexicans! And who celebrates? Mexicans! And on and on.”

The girls portraying “Las Marthas” —named after the original First Lady—take part in the exclusive celebration by invitation only and go through a rigorous, grueling preparation for many months. In the movie they’re represented by cocky Laura Garza-Hovel and shy Rosario Reyes, now a student at Trinity University. The elaborate gowns they wear cost between $15,000 and $30,000 and just being able to curtsey in them is a superhuman task. The dresses are so heavy that “you can’t breathe and your back and knees hurt,” said Garza-Hovel, who seemed to relish when Reyes broke down in tears during one of the rehearsals. “You should know what you’re getting into.”

To answer Garza-Hovel’s above question (“Why do we do this?”), Reyes cites tradition and the fact that “this presentation really gives you the sense of belonging to Laredo.”

Whatever your personal feelings on the celebration, Las Marthas is so expertly told that at the end of the movie you’re at the edge of your seat, wondering whether any of the debutantes (especially Rosario Reyes, the one you’re rooting for) will perform well or fall down the steps when they’re introduced at the ball.

“From the moment I first saw a Mexican-American debutante dressed as a Colonial heroine, I was immediately captivated,” Ibarra told the Current via email. “Growing up along the border myself, I am always looking for ways to explore the contradictions of border life. From the outside, this might look like ‘just pretty girls in pretty dresses,’ but when we look at the bicultural ways this event is celebrated we uncover multiple layers of meaning that deepen our views of the Latino experience in the United States.”

The discussion following the screening is worth staying for and will feature all the movie’s major players: Garza-Hovel and Reyes, dressmaker Linda Leyendecker Gutiérrez, director Ibarra and producer Erin Ploss-Campoamor.