ADOPT A SHELTER DOG MONTH San Antonio shelter pups just got on Petfinder.com. Would anyone adopt that friendly swinging-teat-and-tan dog that begs at the San Pedro gas station? Her fate seems as dark as the 850-plus animals seized from Primarily Primates on Friday the 13th: seven may get a ticket to Chimp Haven in Louisiana, but I hear a whole sickly array of jungle animals are off to the chambers. NATIONAL BOOK MONTH Amy Goodman signed my copy of Static: “For Keli, go to where the silence is.” I had asked her to sign: “For Keli, be a good journalist.” The difference? GLBT HISTORY MONTH Gay blogger Michael Rogers chipped away at cognitive 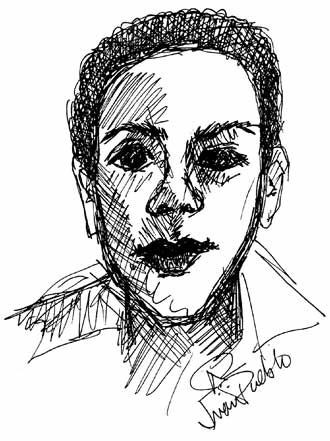 dissonance all month in an attempt to out the Gay Old Party’s Velvet Mafia. He’s been using the Foley scandal as an excuse to expose the hypocrisy in the GOP’s anti-gay policies, he says. I keep thinking of the doc where Billie Jean King beats Bobby Riggs in “The Battle of the Sexes,” then gets painfully outed in a lawsuit with her lover/secretary: In the end it did some good for raising gay visibility. GERMAN-AMERICAN HERITAGE MONTHI owe Beethoven Maennerchor for two beers enjoyed during Oktoberfest; they’re nice and they should get a credit-card machine. NATIONAL DISABILITY EMPLOYMENT AWARENESS MONTH A federal appeals court said UPS can’t bar deaf employees from driving delivery vans. But the real news in the deaf community: the ongoing student protests at Gallaudet University in Washington D.C. over an incoming school president. She’s “not deaf enough” students at the deaf cultural center told the AP. She supports cochlear implants and speaking over signing. NATIONAL RESTAURANT HOSPITALITY MONTH Pat, the server at Niki’s Tokyo Inn on Hildebrand, won me over when he slipped off to his house around back and brought us a persimmon off his tree. NATIONAL CRIME-PREVENTION MONTH Right outside my apartment, someone forced their way into the cab of Roy Eric’s truck, cut the alarm, and made off with two pair of shoes. We’ll both miss the brown Italian leather ones. NATIONAL DOMESTIC VIOLENCE AWARENESS MONTH In the bread aisle Saturday night, the H-E-B employee dutifully ignored Roy Eric shouting “Help!” as I (playfully) rabbit-punched him in the kidneys. “It’s Domestic Violence Awareness Month!” the victim yelped, finally getting the employee’s attention. “I try not to get involved,” the employee said, “but my wife would make me.” By the dairy aisle, Roy Eric was in a headlock, and the employee reappeared and (playfully) offered to call security. INTERNATIONAL STRATEGIC-PLANNING MONTH Bush spokesman Tony Snow said George is retiring the phrase “stay the course” (a moment of silence, please) just as the fourth-deadliest month for U.S. troops draws to a close (now, please speak up). I’ve heard the Balkanization of Iraq will be the new strategy. Of course, breaking up Yugoslavia went smoothly. NATIONAL SPINACH-LOVERS MONTH The irony.