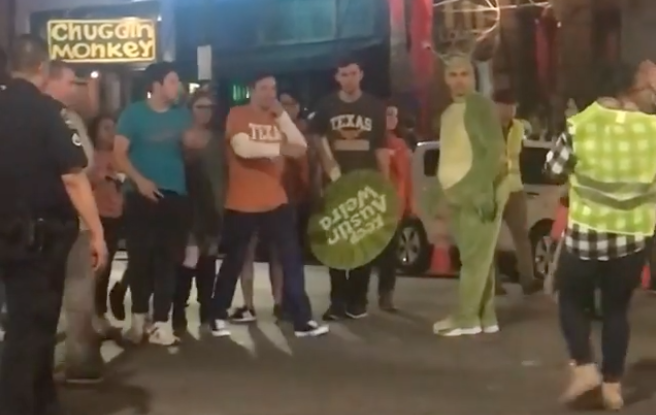 When in Texas, do as Texans do.

That appears to be what late night TV host Jimmy Fallon did in Austin earlier this week. Social media posts reveal that Fallon was spotted running around — literally — the University of Texas at Austin campus as well as the capital's famed 6th Street.

Hi twitter I also got this video of @jimmyfallon running enjoy pic.twitter.com/o6QPP0u11J

According to Austin's KXAN, Fallon was on campus to film an introduction for Thursday's show in Austin.  As part of the special episode, Fallon — wearing a burnt orange shirt with the iconic longhorn symbol on it, naturally — was seen flashing the "Hook 'Em Horns" hand gesture, running, yelling and dancing with students on campus. Other folks saw him walking and riding a scooter down 6th Street.

When you come to the @NCSMHtweets conference in Austin and you get to see @jimmyfallon rolling down 6th St. pic.twitter.com/bmidWidmv1

A taping for Thursday's show took place at Bass Concert Hall, and a lucky 2,500 students who won a lottery attended. UT's own Matthew McConaughey as well as fellow Texans Chip and Joanna Gaines will be guests on Thursday's show.