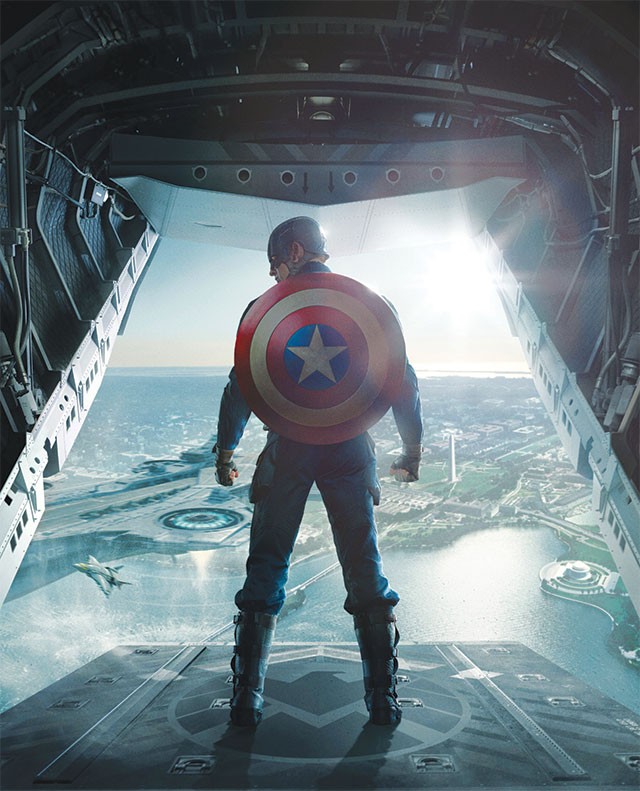 The Avengers movies just keep getting bigger and better and smarter and more relevant with each flick. I might have to start calling this the best genre franchise ever. The Avengers series has gone a long way toward dismantling the stereotype that “comic book” automatically equals “stupid and juvenile.” But even none of the previous Avengers movies has stunned me the way that Captain America: The Winter Soldier has with its scathing commentary on what is happening in the real world today ... all wrapped up in what is some of the most delicious, most comic-booky fantasy ever. The little kid in me almost wants to moan that I don’t want my silly stories burdened with “relevance” and “pertinence” and “political awareness.” The grownup in me, though, is very, very glad to see it.

It’s all down to Steve Rogers (Chris Evans). Since we first met him in the previous Captain America installment in 2011, he hasn’t had time enough to begin to cope with the personal aftereffects of his one-way time travel, via cryonic sleep, from the 1940s to the 2010s, but as Winter Soldier opens, he’s starting to face his disconnect. In one early scene, as Steve makes a new friend in Afghanistan/Iraq veteran Sam Wilson (Anthony Mackie), we see that Steve is keeping a list in a little notebook of all the most important things he needs to catch up on things like “Thai food” and “Star Wars/Trek.” It’s sweet and funny and poignant. But Steve’s displacement isn’t only about pop culture. S.H.I.E.L.D. director Nick Fury (Samuel L. Jackson) reveals to Steve a project the organization is about to launch: It involves a new fleet of massive helicarriers—high-tech aircraft carriers that float in the atmosphere instead of the ocean, that will watch over the planet; spy eyes on high. This was deemed a necessary security move “after New York” (that is, the events of The Avengers). Steve is horrified. “This isn’t freedom,” he tells Fury. “This is fear.”

This might be sweet and funny and poignant if it were only fantasy, but here we have a guy who is unironically called Captain America, an identity that was created as a propaganda tool of the U.S. Army during World War II to promote American ideals, struggling with how those ideals get deployed—or don’t—in the 21st century. There’s tons of wonderful comic-book melodrama involving a potential infiltration of S.H.I.E.L.D. by nefarious forces. Even more of that comic-book action comes, of course, when Steve meets his physical match in the mysterious masked Winter Soldier, who would appear to be a medically modified supersoldier like Steve himself. S.H.I.E.L.D. operative Natasha Romanoff (Scarlett Johansson) reveals that she has encountered this warrior before, and that the rumor is that he’s a Soviet construct left over from the Cold War.

Even the comic-book stuff here, though, feels more relevant than it might: the big battle between S.H.I.E.L.D. forces, including Steve and Natasha, and the Winter Solider and his friends through the streets of Washington, DC—where S.H.I.E.L.D.’s shiny, massive new HQ is—feels like a lone-gunman-on-a-rampage story lifted directly from 24-hour news channels. Along the way to figuring out what the heck is happening at S.H.I.E.L.D., Steve will confront the world of his past in a way that folds his story back in on itself ... and we will confront the world of our past in a way that is deeply uncomfortable. Steve is, quite literally, a museum piece: We visit, with him, the Smithsonian’s National Air and Space Museum exhibit about his extraordinary life. But even with his disconnect in time, is he the only one with his head in the right place when it comes to what the U.S. has been doing to itself in recent decades?

It’s not a spoiler to say that Winter Soldier ends up casting the concept of the modern Western surveillance state as an actual evil plot by people who do not have our best interests at heart—that fleet of spying helicarriers is only a tiny sliver of it. That level of disapproval for a status quo that a helluva lot of people think is a good thing—if they even think about it at all—is absolutely extraordinary in a popcorn movie. Where Winter Soldier goes ... let’s just say that Edward Snowden could be on the marketing payroll for this flick. It’s that revolutionary.