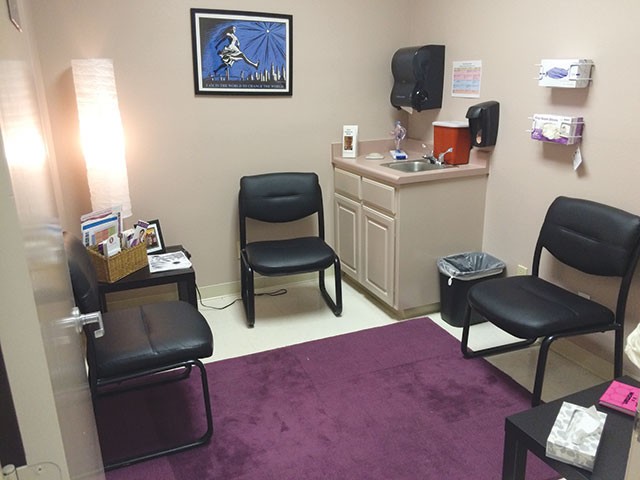 On Tuesday evening, the U.S. Supreme Court reinstated an injunction ordered by U.S. District Judge Lee Yeakel in late August that blocked the enforcement of the ambulatory surgical center requirement of the Texas abortion law, as well as the admitting privileges requirement as it applies to a clinic in McAllen and a clinic in El Paso. The clinics forced to closed because of the Fifth Circuit Court of Appeals opinion issued about two weeks ago are allowed to reopen while the case is under appeal, though it's unclear how many will. The original story follows below.

Does Texas’ restrictive anti-abortion law present an “undue burden” to women throughout the state seeking the procedure? It’s a question that is likely to end up in front of the Supreme Court of the United States as providers and their lawyers fight to preserve access to safe and legal abortion in the state.

On October 6, lawyers representing abortion providers asked the Supreme Court to block key restrictions from taking effect while the Fifth Circuit Court of Appeals in New Orleans considers Texas’ appeal of a lower court ruling that found the law unconstitutional. “Women’s ability to exercise their constitutional right to obtain an abortion will be lost, and their lives will be permanently and profoundly altered,” the attorneys wrote in their plea.

Since the Current last reported in print on the impact of Texas’ law, access to abortion has been reduced dramatically. The new restrictions require physicians who perform abortions to obtain admitting privileges at local hospitals, and abortion facilities must meet the same qualifications as ambulatory surgical centers. Fewer than 10 clinics remain open in four major cities—San Antonio, Austin, Houston and Dallas—for the more than 5 million Texas women of reproductive age. None are open south or west of San Antonio.

In late August, a district court judge ruled that the new restrictions impose an undue burden on Texas women—particularly those in poor and rural parts of the state—by forcing them to travel to obtain an abortion. The judge blocked the surgical center requirement from taking effect statewide, and blocked the admitting privileges requirement at the remaining clinics in west and south Texas.

But Attorney General Greg Abbott, representing the State, has been hell-bent on imposing the tough regulations, many of which have been deemed medically unnecessary by major medical groups. Abbott appealed the district court’s ruling to the conservative Fifth Circuit Court of Appeals. Most recently, the full court announced it would not reconsider its spring ruling in the first legal challenge to Texas’ law, leaving in place the admitting privileges requirement statewide, as well as the requirement that physicians use outdated practices when administering the medical abortion pill.

The Fifth Circuit did, however, deny Abbott’s request that the State immediately enforce the ambulatory surgical center provision pending his appeal, granting temporary relief to the dozen or so clinics that couldn’t meet the requirement and were expected to close on September 1. Whole Woman’s Health in McAllen briefly reopened its doors after closing in March.

Relief from the sweeping law didn’t last long, though. On October 2, a three-judge panel of the Fifth Circuit once again dealt a blow to abortion access, finding that the law does not place an undue burden on women seeking abortions in Texas, even though experts have shown that nearly 1 million women of reproductive age would live more than 150 miles from an abortion facility once the law takes full effect.

Overnight, Texas lost more than a dozen abortion clinics. Andrea Ferrigno, corporate vice president of Whole Woman’s Health, spent the month of September at the network’s McAllen location. Ferrigno said that when the news came down from the court, close to 40 women were scheduled for their consultations and pre-operative appointments. She said staff worked to contact and meet with each patient to inform them that they would not be able to get their abortions at the McAllen clinic.

“We met with patients one-on-one. We didn’t want it just to be a phone call that said, ‘Sorry we can’t see you,’” Ferrigno told the Current. Whole Woman’s Health is trying to help women scheduled at the McAllen clinic get to the San Antonio surgical center, she added, but child care, time off from work and transportation costs all play a role. “We are continuing to offer information and explanation of the law.”

The sheer impact of the law in a state as large as Texas, which has resulted in the closure of more than 80 percent of the state’s abortion clinics, makes the case urgent and significant, said Stephanie Toti, a Center for Reproductive Rights attorney representing abortion providers in the second challenge to the law. Advocates argue that the longer the law stays in effect, the less likely it is that the closed clinics will be able to reopen.

“We’ve never seen an impact before like we’re seeing in Texas right now,” Toti told the Current, adding that the surgical center requirement and admitting privileges requirement have had a “one-two punch” effect on access. “Unfortunately in Texas, the [Fifth Circuit] Court of Appeals has let women down, we’re hopeful that the Supreme Court will step in and set things rights.”

The State isn’t relenting. Abbott in his response argued that the nearly 500-mile round trip from McAllen to San Antonio is a “manageable” “inconvenience” for patients. As of press time, the Supreme Court hadn’t made a decision.

As the high court weighs whether or not to intervene, women are facing hurdles in seeking their abortions.

Just as lawyers formally filed the application for the Supreme Court to step in, Misty Garcia, board member of the Lilith Fund, which provides financial assistance to women who can’t afford an abortion, sat down in her San Antonio apartment to return messages left with the organization’s hotline. On that recent Monday night, she had $1,700 to divvy up among the 15 women who had called asking for help. During her four-hour volunteer shift, Garcia spoke with women in south, central and east Texas struggling to afford their procedures, many of whom had been laid off, were already unemployed or didn’t have a car. A handful of callers told Garcia that the clinics where they originally scheduled their procedures weren’t open anymore.

“It makes me angry. I’ve talked to [women] that have to drive. They need money for gas, they can’t find child care, they don’t have people to talk to, they’re going to be missing work, they don’t know if they can get much time off,” she said between calls. “I’m happy that I can help them. Sometimes I worry that I can’t give them enough money.”