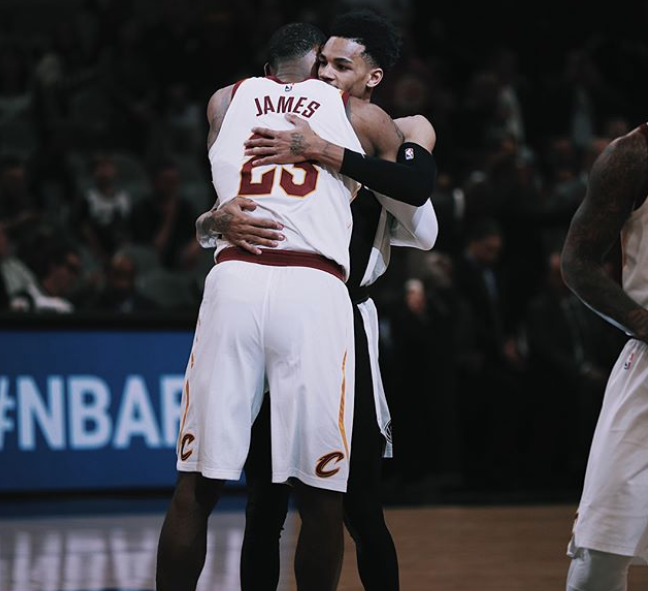 Cleveland Cavaliers star LeBron James had nothing but love for the Spurs when speaking to reporters ahead of Tuesday evening's matchup. He had especially great things to say about Coach Gregg Popovich and up-and-coming player Dejounte Murray.

Murray, who is now the Spurs' starting point guard following Popovich's decision to bench Tony Parker, previously referred to James as his "big bro" in an Instagram post a few weeks ago.

And it appears the feeling is mutual for James, since he lovingly called the 21-year-old point guard "the kid" during Tuesday's shootaround.

"I'm happy where he's come so far in his short career," James told KSAT. "He has an opportunity to go out and showcase what he's all about."

"Trust The Process, Keep Learning And Get Better Every Single Day" pic.twitter.com/rnCnEAailq


But James' confidence in Murray soon turned to praise for Coach Pop. He said Murray's best bet would be to follow advice from the legendary coach, while also offering up his own bit of wisdom.

"He knows what the hell he's doing," James told reporters before the game, according to KSAT. "Every game, every opportunity, you just think it could be your last and that's how you don't take things for granted."

James seems to follow his own advice. While the Cavaliers lost to the Spurs Tuesday night, James became the youngest player in NBA history to reach 30,000 points. Of course, Popovich congratulated James on the feat as well, though he told reporters it wasn't their business what he said.

In the post-game press conference, James shared more praise for Popovich as well as the Spurs.

"He's one of my favorite guys ever," James told KSAT. "I love everything that Pop represents both on and off the floor."

Check out all he had to say about Popovich, the Spurs franchise and earning his new record.

#✌🏾☝🏾👌🏾: #Cavs #LeBron James (@KingJames) thanked #Spurs fans & #SpursNation for the standing ovation when he became the youngest player in #NBA history to reach 30,000 pts tonight. He also made time to share how much he admires #Popovich #KSATnews #GoSpursGo #KSATsports pic.twitter.com/VTuNzhIZRS