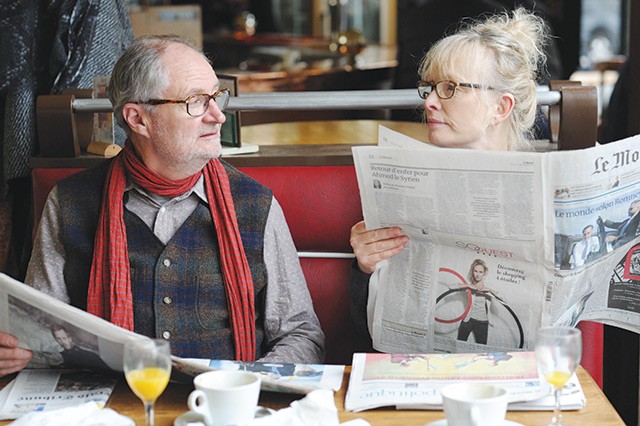 “Why doesn’t anybody want my company?” asks Nick (Jim Broadbent) of his wife, Meg (Lindsay Duncan), in Le Week-End.

The question, for that moment, goes unanswered, but here’s the reason, Nick: You’re a whiny, wimpy jerk. You’re one of the least appealing characters to appear on screen in years.

There are reasons Nick is a jerk. He’s prone, at his core, to feeling unloved. His wife seems to hate him. His children (all off-screen) seem to take advantage of him. And Nick, a college professor, says really dumb things to his students. One of those things gets him fired.

Le Week-End is a chronicle of late-life misery, a “What do we do now that the kids are gone?” kind of story. It’s been done before, recently and better (Gloria; Enough Said).

Unlike Enough Said, Le Week-End is a drama with comedic touches. Nick and Meg are on a short 30th anniversary trip to Paris. He’s hoping they’ll rekindle their romance—he makes a rather vulgar comment about not having seen his wife’s vagina in five to 10 years—and she’s thinking of leaving him.

If only they could leave each other sooner. Then the movie could end and we’d spare ourselves 93 mostly interminable minutes.

Le Week-End rests somewhere in between. Its screenplay, by Hanif Kureishi (who has worked with Michell before), has nuance and explores subtly the ways a long relationship might break down. It’s masterful in the way it lets Meg be horrible to Nick (and vice versa) one moment and then loving the next. It always feels organic, and Broadbent and Duncan, two pros, play the beats in a way that never seems forced or inauthentic.

The weekend starts badly. The room Nick has booked is a mess, and Meg takes her bag and hails a taxi, fully intending to leave without her husband. He catches up and they land at a five-star hotel in the presidential suite. “Tony Blair stayed there,” the clerk tells them, as a way to appeal to their Englishness.

Despite Nick’s misgivings, they take the room—Meg really wants to stay someplace nice—but before long he’s prattling on about their expenses. Later at dinner, we learn the reason for his worries: They just co-signed a mortgage for their no-good son, and Nick lost his job after telling a student that she’d do better at school if she spent half as much time on her studies as she does her hair. It turns out her hair is part of her religion and culture, and the muckety-mucks give him the sack.

After bumping into Morgan, Nick and Meg attend a dinner party he’s throwing to celebrate some of his recent good fortune. Morgan is happily remarried, has a kid on the way and his most recent non-fiction book is a surprise (and huge) bestseller. Naturally, after Morgan tells Nick how important their friendship was back in school, Nick shits all over the party. Maybe that’s why no one wants your company, dick.

Sigh. I don’t often let my emotions get the better of me when writing criticism (except when I review Wes Anderson), but there’s something deeply contemptible about Nick and Meg and the way they treat each other that’s hard to look past. Even though the performances are excellent (Broadbent is always quite fine, as is Duncan, and Goldblum is at his winning Goldblumiest) and the screenplay refined, Nick and Meg are so unpleasant any viewer could be forgiven for hoping they take a long walk off Pont Neuf and into the Seine, preferably while wearing 10-pound ankle weights.

Sure, there are great movies about terrible people—No Country for Old Men, The Silence of the Lambs and The Godfather, in which everyone is ghastly, to name but three—but those films are about bigger-than-life people. They’re fantastical, even if they adhere to a particular reality. Le Week-End features two characters who could be your parents or your grumpy next-door neighbors. Who wants to watch that?