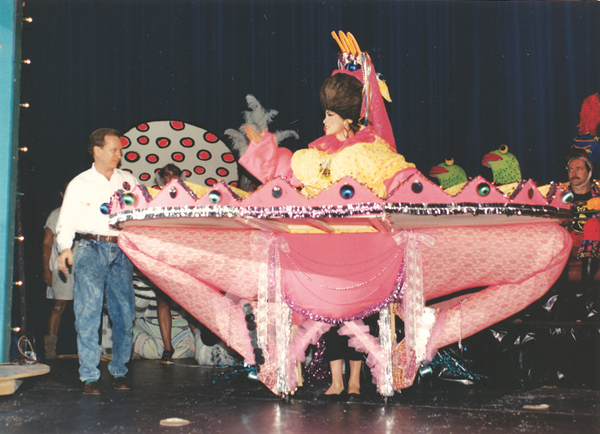 Imagine you invite a friend to town for Fiesta. Imagine further that this friend has no knowledge of the event and has somehow grown to adulthood without learning the meaning of the word “fiesta.” As they’re preparing to come spend a few April weeks with you, your friend looks up the unfamiliar word. They laugh, half in excitement, half in mild terror.

And then, if you’re doing it right, you forget to explain, rushed into the whirlwind of Fiesta, a cultural celebration that is, event after event, a truly unforgettable experience. Two weeks later, your friend, needing no history lesson, sleeps a deep and smirking sleep the whole plane ride home.

You did right, but here’s a bit of what you might have told your buddy if you weren’t so busy instructing by example, like a good San Antonian:

It all started with a flower parade, or Battle of Flowers, held in April of 1891 to honor the heroes of the battles of the Alamo and San Jacinto, which had been fought in 1835 and 1836, respectively.

Shortly thereafter, a group of San Antonio women formed the Battle of Flowers Association. And, with the exception of 1918 during World War I and the period from 1942 through 1945, the parade, and a still-growing multitude of events surrounding it, has run continuously ever since.

By 1895, the year the parade queen was first chosen, there was already a weeklong celebration surrounding the Battle of Flowers. Today, the parade, still the only one to be planned and run exclusively by women, is the largest Fiesta parade and the second largest parade in the nation, second only to Los Angeles’ Tournament of Roses Parade.

In 1909, the Order of the Alamo, an organization that would have a significant impact on the growth and staying power of Fiesta, was founded with the sole purpose of crowning a “Queen of San Antonio.” Held in the ornate confines of the Majestic Theatre, the Coronation of the Queen of the Order of the Alamo is a lavish affair featuring duchesses, a princess and Her Gracious Majesty dressed in elaborately beaded gowns with impossibly heavy trains.

In 1926, King Antonio, the de facto king of Fiesta, was first selected from among the ranks of the Texas Cavaliers, an “organization of business, civic and community leaders, who dedicate their time and talents in support of San Antonio area charities.” The Texas Cavaliers are also responsible for the annual river parade, a Fiesta staple that was first held in 1941.

Night in Old San Antonio (NIOSA), the popular, nighttime street fair that is now the heart of Fiesta for many San Antonians, was started as a one-night affair in 1938 by the San Antonio Conservation Society. By 1953, the event was so hot that it had already expanded to the same, four-night format that we have today.

First crowned in 1947, El Rey Feo (“the ugly king”) became an official part of Fiesta in 1980, representing a de la gente counterpoint to King Antonio and raising scholarship money for the League of United Latin American Citizens.
Meanwhile, the Fiesta Flambeau Parade, now an essential capstone to Fiesta and the nation’s largest illuminated night parade, was first held in 1948.

Originating at NIOSA in 1951, the irreverent Fiesta favorite Cornyation began as a satire of the Coronation of the Queen of the Order of the Alamo — complete with bizarrely named duchesses and outlandish “gowns” designed to be worn but once. Morphing with changing times and broadening its focus (from high society to politics and beyond), the outrageous spectacle has now raised more than $2 million for local HIV/AIDS charities.

In 1959, the multifaceted party was continuing to grow at such a rate that the San Antonio Chamber of Commerce formed the Fiesta San Antonio Commission to coordinate it.

By the early 1990s, Fiesta was generating in excess of $100 million for the community each year.

In 2017, the University of Texas at San Antonio’s Center for Community and Business Research found that Fiesta contributed $340 million in sales to the local economy, while many of the Fiesta Commission’s 100 participating member groups fund scholarships for local students, and other Fiesta-centered organizations and individuals generate huge sums for an array of important local causes.

All economics and acts of goodwill aside, beyond the pageantry and brushes with royalty, the parades and sporting events, beyond the music and fairs, the dances and carnivals, beyond the lights and smells and tastes — the collective celebrations of a people, a place and a complex network of histories, and the general feeling of disarming togetherness that Fiesta fosters, are what really make this San Antonio tradition a keeper.