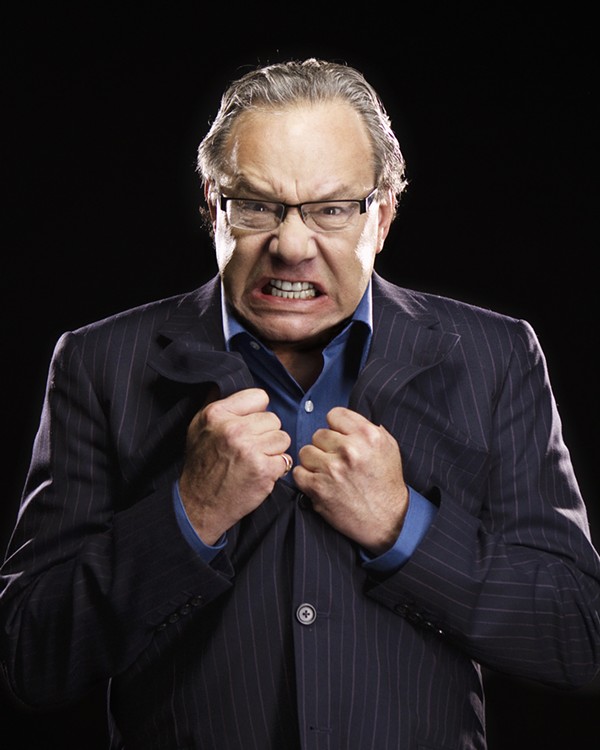 There is no mistaking the voice of Lewis Black. Whether you know him from his  award-winning stand-up specials on cable, his regular “Back in Black” contributions to Comedy Central's The Daily Show, as the voice of Anger in Pixar's blockbuster Inside Out, or in his role as ambassador for voting rights for the American Civil Liberties Union.

While tilting against the idiocy of life's windmills, often times to the point of being at best apoplectic or at worst having a mental breakdown, Black strives to be a voice of reason in an increasingly indifferent world. He took some time to speak with us recently in advance of his appearance on Friday, September 9 at the Majestic Theatre as part of his tour ("The Emperor's New Clothes – The Naked Truth Tour"). We spoke about his days as a playwright, the Gulf of Tonkin Resolution, and, of course, The Donald as pure comedy gold.

I understand you grew up in the D.C. Beltway. Were politics a part of your life growing up? Were they something your parents were passionate about?

Politics were in our face. You're living 20 minutes away from the nuthouse. I like to put that everyone else's national news was our local news. My Mother would watch the news and just yell at the television half the time. When the [Vietnam] War started, my Father said that he was going to see if there was actually a legal basis for it.

Stand-up wasn't your original goal from what I've read about you. You went to college to study to be a playwright. How did comedy evolve out of that?

Mainly I got into it because more people started to gravitate towards my stand-up. I ran this club in New York and we were doing these plays and I was kind of opening in front of these plays. I just became more and more comfortable with it. I'd been doing stand-up off and on since I was 21 just for fun, but by the time I was 40, it really became my main focus.

Yeah, I was told I was funny. I knew a lot of funny people, and I tend to gravitate to funny people. You know, you don't gravitate to depressed people. You don't go to a weep-a-thon. My friends are all still really funny. I'm still kind of surprised, but yeah, I do consider myself to be a funny person.

A lot of the times, I think I can't believe that came out of my mouth. And a lot of it I participate in, but a lot of it, I'm just as surprised as the next person. There are a lot of people who I think are funnier than me. My friend Kathleen Madigan is hysterical. Dave Attell, he slays me. Bill Burr is funny. Jon Oliver's stand-up, I hear him and just say, "Fuck, I should've thought of that.”

So, what do you find funny? What makes you laugh?

Stupid. Stupid makes me laugh. It's just like, really? You have the choice between this and that and one is the obvious choice, but you're going to choose that? You are so wrong, it's beyond belief. It's like that kid yesterday. He tried to impress his girlfriend by jumping off a building and surprising her and wound up getting stuck between two buildings. That's funny. If he died, it's not as funny. You'd have to wait a few days, maybe two weeks. But since he only twisted his ankle, it's funny.

I would venture that the majority of people became aware of you from your work on The Daily Show. How did that role come about?

In the midst of Jon Stewart’s run, did you all realize how much of a cultural touchstone you guys were going to be? I remember a point in time when there was a poll and a good chunk of folks said they got their news from you guys. What did you think about that?

We'd heard that, but we never really paid attention to any of that. You never really take things like that seriously. I mean you can't or else you lose your sense of humor about things. Then you become one of those rock stars who's preening standing in front of a mirror two seconds before they go on.

Since so much of your material over the years deals with politics, as a comedian, who would provide you with more fodder as president?

I had read a quote that was attributed to you describing your style as “being on the Titanic every single day and being the only one who knows what is going to happen.” Do you still feel that way?

Yeah, I still feel that way. Seriously, it's kind of like, do you still want to discuss this stuff or do you want to do something about it. We're not going to figure out immigration? Really? We're just going to say that it is A or B and there is no compromise? I mean, even under Bush, he gave it one last shot and he couldn't get people on board. It's pathetic.

We have a social security system that needs to have some sort of an overhaul. I'm not convinced of what that is, but privatizing it would be mildly psychotic. All these people, all these geniuses, they can't figure it out now? This is in light of an older population that is living longer than anybody expected. I mean, you can't move the retirement age to 68? Nobody can figure this stuff out? I mean seriously, grow the fuck up!

And the Affordable Care Act? Yeah, OK great idea, but I know enough people that it is fucking over. It needs to be revamped. Well, revamp it! Don't just sit there and whine. You've got an out of control pharmaceutical industry. You've got the fucking health insurance industry fucking people over. Shut the fuck up and figure it out! It's too much now.

These seem like common sense-type of suggestions. Has the concept of you running for public office been brought up before?

Yeah, people yell that out and nah, I'm not going to do that. I don't want to deal with those people. Like those politicians, I don't want to have to go to work. Right now, I at least enjoy what I do.

There are all those cliches out there to describe your sense of humor: dark, caustic, angry, aggressive. How would you describe it?

I'm always curious about what people think of our city. You’ve been here a few times, what are your thoughts on SA? How are we as a comedy city?

I've performed there several times. I used to perform at the comedy club there. When you talk about a city for comics, what they really care about is, is there a mall or somewhere I can walk around? Are there any fun spots to go do some things? San Antonio has everything you could want if you're a comic.

Tickets for Lewis Black's "The Emperor's New Clothes: The Naked Truth Tour" at the Majestic Theatre are on sale now through Ticketmaster. The show starts at 8:00pm. Follow on Twitter at @TheLewisBlack for information on how to participate in a Q&A at the show.