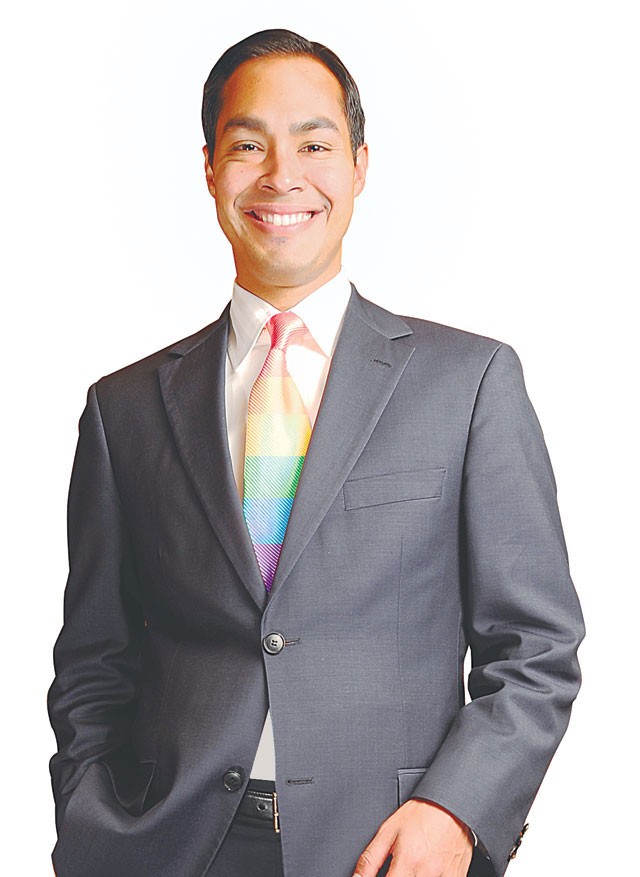 When the Human Rights Campaign released its 2012 Municipal Equality Index, San Antonio scored a 48 out of 100, compared to Austin's and Dallas' scores of 91 and 76, respectively.
As a reaction, Mayor Julián Castro last week appointed senior policy advisor Adam Greenup to act as an LGBT liaison for his office. When we sat down for lunch last week with Greenup, he told us he had plenty of time working with the LGBT community as chief of staff for former D1 Councilwoman Mary Alice Cisneros, meeting with bar and business owners on how to improve the Main Street strip and working with SAPD on LGBT-sensitive policing.
First on Greenup's list of priorities is working with City Council to amend five non-discrimination provisions of the city code to include protections for "sexual orientation and gender identity/expression." But beyond that, Greenup says he hopes to boost opportunities for LGBT business owners and possibly even establish a local human rights commission to hear complaints of discrimination in the city. Here are some excerpts from our conversation with Greenup.

What did the HRC index show the Mayor's office about LGBT equality in San Antonio?
I think the HRC equality index shows we have a lot of opportunity for improvement. We had been looking at updating our non-discrimination ordinances prior to the HRC index even coming out. We're looking at best practices in other cities, and Texas is actually fortunate that we have a number of cities that have already moved in that direction. We have models to follow. We've reached out to Dallas, Fort Worth, and Austin, and they're telling us how they did it. We're just trying to find a way to implement it here in a way that makes sense.
Here, [City Manager Sheryl] Sculley already issued an administrative directive ordering the city to do much of what we're asking be codified in an ordinance. So, I think that shows the olive branch has already been extended. There's not this overwhelming need to act right now in response to some terrible event. But the city attorney's office, city manager, and Council District 1 are all already involved with this, trying to figure out a timeline that works best. We're targeting probably sometime toward the end of this year.
The areas that Sculley's administrative directive does not extend to relates to non-discrimination in public accommodations, public housing, and board and commission appointments. There is a need for fixing that. And the fear with any administrative directive is that it can be changed at any time. Were a different city manager to come in and change it, we'd be starting back again at square one. If we codify the ordinance, I think that goes a long way. It's something that's on the book and something that's going to stay.

Do you suspect that will be controversial when it goes before Council, much like when Council approved domestic partner benefits for city employees?
There's always going to be a group of people who has a negative reaction to these issues. They're going to be vocal and come out just like they did with the domestic partnership benefits issue. But I think with a lot of people, the issue they had with that is it seemed like marriage. This [updating non-discrimination ordinances] is really about ensuring discriminatory practices are prevented from happening for a group of people. We already have protected classes when it comes to race, nationality, gender, and such. This would be extending the same protective status to another group of people that's been long maligned.

What else could the city do on the LGBT front?
A domestic partnership registry program, which is something we haven't really looked at here yet. It's basically a program where same-sex couples can go and register their relationship status in an official way, though it doesn't entitle them to benefits in the way marriage would in a state that's legalized gay marriage. But it's a way to show you're a committed couple, to have some sort of documentation the city puts out.
One of the things we're looking at, hopefully not too far down the road, is the establishment of a local human rights commission. It would extend far beyond LGBT issues, but would certainly cover that, too. It would look at discrimination within race, gender, the whole gamut. And the purpose of this commission would be to make sure we're abiding by the rules we already have on the books, and that SAPD's enforcing the laws in a way that lowers discrimination of minority groups in the city. It depends on what model we would take up, but in some cities that commission would actually hear complaints about discrimination happening that's happened in the city and recommend paths to address whatever the issue is.

How big of a problem is discrimination against LGBT folks in San Antonio?
Well, if you look at some of the comments that were posted in the [Express-News] story about my appointment alone, you'll see there's a certain segment of the population that still has very adverse reactions to gays, lesbians, and transgendered people. But the tide is changing. I think most people either have someone in their family or have friends who are gay, lesbian, bisexual, transgender. There seem to be pockets of opposition or prejudice, but I think it's a very small amount. I think overall we're a city that celebrates diversity.