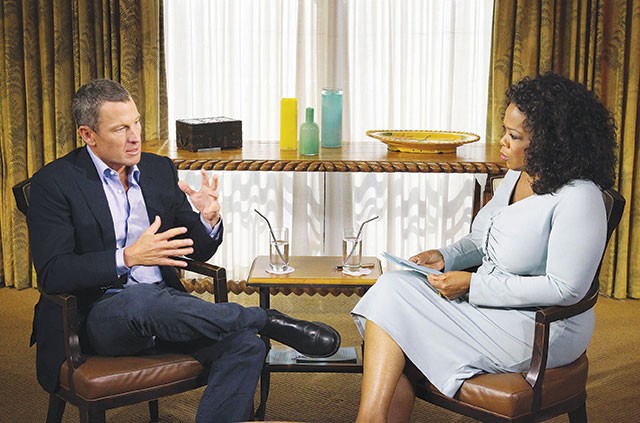 The most telling moment in The Armstrong Lie isn’t his January 14, 2013, conversation with Oprah Winfrey, during which Lance Armstrong finally cut the crap and admitted to using performance-enhancing drugs in each and every one of his Tour de France victories. For Oscar-winning filmmaker Alex Gibney (Enron: The Smartest Guys in the Room, Taxi to the Dark Side) that would’ve been too easy: build things up, show a million clips of Armstrong denying, then conclude epically with … the Oprah confession. (Gasp!)

It’s more complicated than that: originally, Gibney set out to film the 2009 Tour de France return of the hero who had won the event seven consecutive times, the American (from Plano, TX, of all places), wearing a white hat and coming out of a triumphant four-year retirement to prove the haters he’s still the best, drugs or not.

Of course, there were drugs everywhere. And the movie took an unexpected turn when the drug scandal unfolded in front of Gibney’s eyes.

“I fucked up your movie, didn’t I?” says a dejected Armstrong after realizing winning this Tour was going to be more difficult than before.

“Nothing fucks up my movie!” responds Gibney, and he was right: from that moment on, his camera recorded the scandal from well inside, to the point that this isn’t a movie about Armstrong: it is about greed, about choosing individual glory to the detriment of your team and of believing your own lies because you couldn’t “let down” all those cancer patients you inspired.

So, after a disappointing early stage at the 2009 Tour de France, Armstrong throws himself on the bed and, looking at the ceiling, starts to break down.

“Trust me, this will not be the same if I don’t…” says Armstrong. “It’ll be hard. Harder than I thought.”

Gibney was there when the surprise drug tests began, he spoke to all the key members in the story, from Armstrong doctors to former teammates and, especially, to possibly the only true hero in this tale: Betsy Andreu, the wife of former teammate Frankie Andreu. She was the only one not intimidated by Armstrong, and a key reason for his eventual fall from grace.

“At some point people will say, ‘Here’s what happened,’” Armstrong tells Gibney. “Then they’ll judge for themselves. I don’t know what people will think in 30, 40, 50 years. Is the record book still going to be blank for seven years? I guess it will be, I don’t know. Or will they look at this in the context of what it is, and say, ‘Well, yeah… He won the Tour de France seven times’?”

It’s easy to dismiss Armstrong’s statement as proof that “he still hasn’t repented,” but he has a point, a small but solid one.

“For as long as the Tour [de France] has existed, since 1903, its participants have been doping themselves,” wrote German journalist Hans Halter in 1998, one year before Armstrong won his first Tour. “No dope, no hope. The Tour [de France], in fact, is only possible because—not despite the fact—there is doping. For 60 years this was allowed. For the past 30 years it has been officially prohibited. Yet the fact remains; great cyclists have been doping themselves, then as now.”

Lance Armstrong made a lot of money for a lot of people, including himself. When the scandal was too big to control, he was stripped of his titles, chewed up and spit out by the very same organizations that knew all along doping was part of the deal and Armstrong wasn’t the only one cheating. Of all the competitors who made the Tour de France podium in 1999-2005 (the years Armstrong won), only Spaniard Fernando Escartín was clean, and Gibney’s film gives a strong indication that all top contenders were involved in the deception.

Does this excuse Armstrong’s behavior? Of course not. He was a dickhead (a word he loved to use against his critics during denial-mode) who, yes, truly cared about the cancer patients he inspired, but who ultimately only cared about winning, on and off the bike.

Lance Armstrong was also a world champion in his 20s, and lost it all to cancer. He came back and won his titles back and much more, only to lose everything again. Not only did he lie, he kept on lying after getting caught. But the fact that the International Cycling Union never gave Armstrong’s yellow jersey to the runner-up—or the third, or the fourth, or the fifth—should tell you something.

Armstrong wasn’t the only liar in this story; he was just the best at it, especially among those competitors who were doing the same things he did.