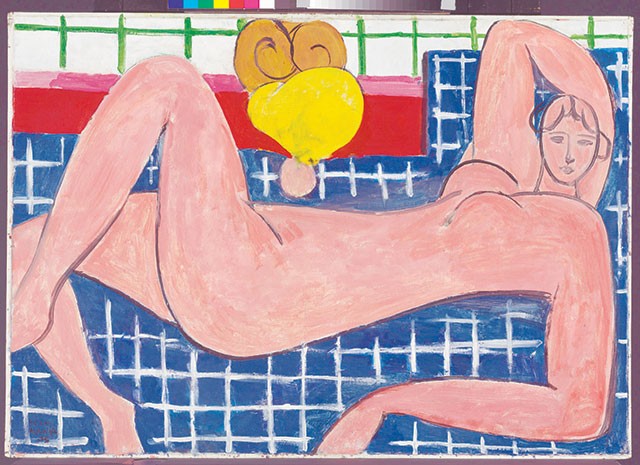 French artist Henri Matisse never lets you forget you’re looking at a painting. He fills every square inch of his canvas with color and pattern so no point is any more or less important than any other point in his flattened picture plane. Brush strokes are easy to discern, colors and forms seem to have lives of their own, patterns define shapes, lines are sinuous and the backgrounds and spaces around objects are all pushed to the foreground, floating in front of the viewer like a beautiful dream.

Along with Pablo Picasso and Marcel Duchamp, Matisse is regarded as one of the most influential artists of the 20th century. But Matisse’s mature work is purely pleasurable, transcending any particular movement or period.

Over the course of nearly a half century, Claribel and Etta Cone, wealthy sisters from Baltimore, collected paintings, sculpture, prints, drawings and illustrated books by Matisse that provide an extraordinary overview of his development as an artist. Gifted to the Baltimore Museum of Art in 1950, the Cone Collection is the focus of “Matisse: Life in Color,” on view through September 7 at the San Antonio Museum of Art.

A respected doctor, Claribel served briefly as the president of the Women’s Medical College in Baltimore. Etta, an amateur musician, managed the household. With income from an inheritance, the Gilded Age socialites were able to travel the world and follow closely the developments of French modern art guided by their friend Gertrude Stein, the modernist writer, and her brother Leo, an influential art collector and critic. Most of the works they collected by Matisse are easel size and were done after World War I with a special emphasis on the time the artist spent in Nice in the south of France, where he became infatuated with the brilliant, sun-lit colors.

Large Reclining Nude, more popularly known as The Pink Nude, and Purple Robe and Anemones, both from the mid-1930s, are two undisputed masterpieces from the Cone Collection and the highlights of the exhibit. While the works are mounted chronologically so you can study in depth Matisse’s growth as an artist, these two paintings sum up everything Matisse learned from his endless experiments with lines, colors and shapes.

The Pink Nude vividly illustrates Matisse’s most famous quote, “Above all, I do not create a woman, I make a picture.” The catalog contains a remarkable series of photographs showing how the painting evolved, as he worked and reworked the reclining nude figure, inventing his own highly expressive visual language utilizing the play between brightly colored areas and contrasting patterns. Its coolly intellectualized sensuality is elegant and ethereal compared to the rough and earthy form of one of his earliest efforts, Blue Nude, which provoked uproar when first shown at the 1907 Salon des Indepéndants.

Matisse remained enamored with the nude female form for his entire career, though he struggled with how to depict a nude convincingly in the 20th century. He found the solution in images of harem women, or odalisques, a popular subject for earlier French painters. But the languorous, semi-clad women Matisse painted are distinctly modern, revealed by their hairstyles, furnishings and bored expressions. The exotic mingles with the erotic in the many odalisques Matisse painted from 1919 to 1928, filling an entire gallery in the exhibit. During trips to Morocco, Matisse became fascinated by the lavish decorative hangings and rugs, a primary source of the vibrant patterns and textures enlivening his paintings.

The French women in other paintings Matisse did during the 1920s appear distracted, often gazing blankly into space. The Music Lesson, Two Women Seated on a Divan shows them studying a music book, but not actually playing. The well-dressed Woman in a Striped Pullover, Violin on the Table, looks listless. The Young Woman at the Window, Sunset, appears to be daydreaming rather than admiring the view. In the catalog essay, Jack Flam wonders why the Cone sisters were so drawn to paintings of women “imprisoned within a world of limited possibilities and circumscribed action,” concluding they probably identified with those who “were prepared to play an active role in life but who constantly struggled against being politely but firmly marginalized.”

In the early works, where Matisse is emulating older French artists such as Èdouard Manet and Paul Cézanne, it’s easy to see why one critic called him “an apostle of ugliness.” Matisse struggled to break free of his traditional art training and the way out proved to be sculpture, where he learned to discard reality and pursue his own vision. Interior, Flowers and Parakeets is a key painting, but it’s far more realistic than his later works where he learned to compress space and eliminate all but the most essential details.

Overall, “Matisse: Life in Color” is a sumptuous journey through the mind of one of the towering figures of modern art, whose work is richly complex yet a joy to see.