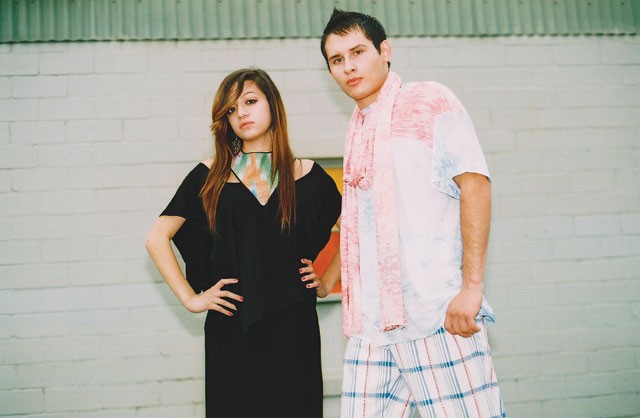 You need to be precise," says Adrienne Yunger, the featured designer of San Antonio Fashion Week and winner of this year's Fashion Group International Rising Star Award for her men's ready-to-wear clothing. "You've got to make sure you measure twice and cut once. It's all about starting right."

Yunger started as a pattern cutter for Dos Carolinas handmade clothing, which makes those intricate Latin American guayabera dress shirts here in San Antonio. So it's interesting to note that not only are her designs also incredibly precise, but so has been her fashion career. She earned a B.A. in fashion management and design from the University of the Incarnate Word, moved to New York City to work in production for CK Jeans and for Vera Wang during fashion week. "I was backstage moving huge 20-pound dresses up and down stairs for the show," Yunger recalled from her Alta Vista studio at Hausmann Millworks. "Mannequins were setup with white muslin and [Wang] came in and said, 'No, all wrong!' so everybody had to switch everything. It was kind of neat to see a woman of power delegating to everybody. It was cool and empowering."

Yunger also worked with the famous fashion stylist and editor, Polly Mellen, while putting together and photographing gowns for Wang's famous book On Weddings. However, adding some indie cred to her high-fashion experience, Yunger also worked costume design for independent films like Vampires in the Hood. Perhaps it is Yunger's range of experience that keeps her designs fresh and unique, including inspiration she recently received from a jellyfish. You read that right: a jellyfish. "From Finding Nemo," Yunger says. "I have kids. I am watching a lot of kids' movies."

Yunger begins pulling items from her spring/summer 2012 collection from her studio racks. A bright blue silk top with two vertical green stripes was motivated by Charlie Sheen. Another — white pants and shorts with red and blue plaid — came from musing over Chevy Chase's character in National Lampoon's Vacation ("He was wearing really short shorts with loafers and I thought this was kind of cool because the 80s are coming back.")

Yunger's label, Ferreira Designs, derives its name from her Mexican grandmother — a former seamstress for the Levi's manufacturing company that closed down in 1990. Formerly off South Zarzamora Street, the San Antonio location was the company's largest in the nation, and its closure put over 1,150 seamstresses out of work. Yunger's mother — a great artist who often drew pictures of Yunger and her sisters— not only constructed original Halloween costumes for her children growing up, but briefly made uniforms and cuffs at the Finesilver Manufacturing Company in downtown San Antonio.

During my visit, Yunger's models wore some looks from San Antonio Fashion Week, such as a men's white cotton shirt half-dyed red, with the Chevy-inspired pants. A woman's brown Lycra knit dress with a quilted cotton bodice is very unique, however the men's bright green velveteen coat with a western-style plaid shirt is a showstopper. It is accompanied with denim jeans Yunger bleached and sanded down, a mix of several looks: country-hipster-city chic.

Yunger's had a busy year. She participated in Austin Fashion Week in August as well as the new Mercedes-Benz Fashion Week in El Paso in September, at which she received the Best Contemporary Designer Award. If she continues to be as precise with her career, and "starts right" with each upcoming collection, we can expect to see great things from her and excellent additions to San Antonio's growing fashion community. •

To get your hands on (or body into) Yunger's clothing, logon to her website (adrienneyunger.com) for custom made-in-SA goods.