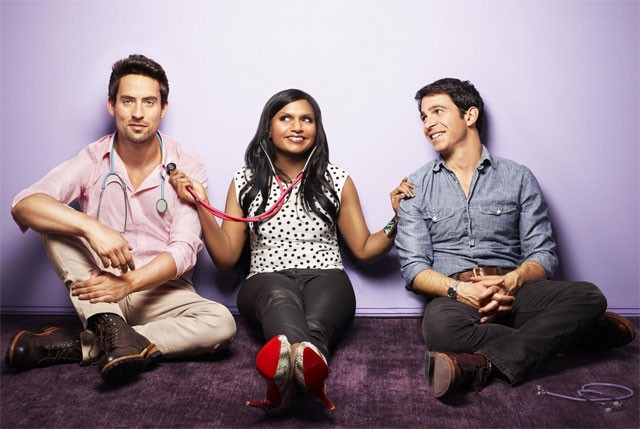 The Mindy Project (8:30pm Tue, Fox)
Dr. Mindy Lahiri (Mindy Kaling) has spent a lifetime looking for the perfect man, but she can’t find him. In the pilot for this new series, we perceive her problem: She sees everything through the lens of romantic comedies like When Harry Met Sally. It’s hard for a self-described “chubby 31-year-old woman” to live up to the Meg Ryan standard — especially one as narcissistic and hard-hearted as Mindy.

You may have guessed that The Mindy Project is no ordinary sitcom. Written by Kaling herself, it dares to give its heroine unlikable qualities. Yet we like her anyway, thanks to the subtle script and Kaling’s equally subtle performance. She finds herself in one Katherine Heigl situation after another — for example, getting trapped in the elevator with a handsome coworker (Bill Hader) — but somehow never achieves a Heigl-worthy outcome. It’s the curse of being a real woman who’s bought into Hollywood’s unrealistic view of love.

Mindy may not find the perfect man, but The Mindy Project could well prove to be the perfect sitcom.

Emmy Awards (6pm Sun, ABC)
I left the TV screen briefly last month to check out a few movies. Remind me never to do that again. The Dark Knight Rises couldn’t compete with Game of Thrones, Breaking Bad, or Mad Men as an investigation of humanity’s dark side. And The Campaign couldn’t compete with Curb Your Enthusiasm, Girls, or 30 Rock for laughs.

Let’s all bow down before television as the industry celebrates its increasingly sophisticated programming. And let’s all hope the movie moguls are taking notes.

Partners (7:30pm Mon, CBS)
This is one of those sitcoms with a script so coarse and obnoxious that you think, “Man, those writers must be jerks.” It’s about a straight guy (David Krumholtz) in a lifelong friendship with a gay guy (Michael Urie) — the kind of gay guy who’s obsessed with musicals, penis jokes, interior decorating, and Clay Aiken. Indeed, he has tattooed “Clay Aiken” on his ass, allowing the straight guy to say, “I’m going to kick you in the Aiken!”

Is there no other way to use a gay man in a sitcom than to freight him with every locker-room stereotype? Urie has comic talent, but he can’t save a script written by a bunch of Aikens.

Ben and Kate (7:30pm Tue, Fox)
Fox seems to have figured out the secret to sitcoms. While other networks struggle with the age-old form, Fox brought us New Girl last year and, for 2012-13, The Mindy Project and Ben and Kate.

Ben and Kate sounds unremarkable: A romantically challenged single mom (Dakota Johnson) is plagued by her goofy older brother (Nat Faxon). But Fox, having figured out the aforementioned secret, delivers memorable characters, sophisticated comedy, and even a bit of poignancy.

I’m not exactly sure how the network does it (if I were, I’d quit this blurb-writing job and produce my own sitcom). However, I suspect it has something to do with expert timing and a casting director who found incredible actors for every part, down to the best friends (Echo Kellum, Lucy Punch) and the 5-year-old daughter (Maggie Elizabeth Jones).

In the pilot, Ben establishes himself as a soon-to-be-classic TV idiot. With utterly misplaced confidence in himself, he crashes his ex-girlfriend’s wedding and spoils Kate’s hot date. “You know why I do stupid stuff like that?” he asks Kate as they contemplate the ruins of the day. “Because it’s fun.”

Vegas (9pm Tue, CBS)
Vegas claims to be based on the real story of Ralph Lamb, the sheriff who maintained law and order in the early years of the Las Vegas Strip. But it’s hard to see much realism in this new drama, which portrays Lamb (Dennis Quaid) as a John Wayne-style cowboy who can knock out three guys at a time with his bare hands. The pilot combines this Western influence with a mob drama and a police procedural, tossing in showgirl razzle-dazzle for good measure.

Sounds kind of fun, doesn’t it? It ought to be, but Quaid throws a wet blanket on the proceedings. He strikes manly poses with a perma-scowl, as if taking the nonsensical script seriously. In this telling, Sheriff Lamb’s rock-solid integrity is more than a match for the gangster (Michael Chiklis) intent on corrupting the Strip.

In real life, of course, rock-solid integrity had no place in Vegas. And it’s simply laughable in Vegas.