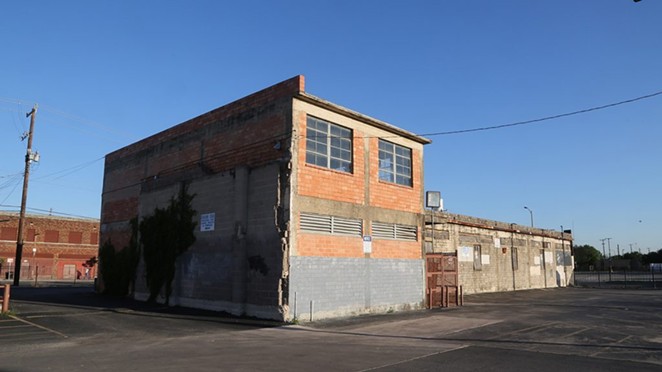 The family that owns the Golden Star Café in west downtown is taking the unusual step of asking the city to strip a building of its historic designation after the Historic and Design Review Commission (HDRC) denied a bid to demolish it earlier this month.

The Lim family wants to tear down everything but the façade of the 90-year-old Whitt Printing Co. building, which is next to the restaurant, to make the property more attractive for development. The city has declared the building a historic landmark due to its use as a printing house for Spanish-language publications for much of the 20th century.

The HDRC is an advisory panel, and city leaders sometimes overrule its decisions, but it is rare for property owners to ask the city to remove a historic designation outright. Shanon Shea Miller, director of the city’s Office of Historic Preservation, said she couldn’t recall any instances of it being done.

The city’s development code allows for a designation to be removed, but such a thing is intended for a situation in which the building has been destroyed in a fire or another disaster, she said.

“We’re definitely concerned about it,” Miller said. “To cut a hole into a historic district really jeopardizes the whole purpose of a district, which is to maintain the character of a whole area. When one part is carved out, it’s a loss to the whole fabric.”

District 5 Councilwoman Shirley Gonzales has signed off on the Lim family’s request for the case to be expedited, and it is set to be considered at the June 3 meeting of City Council—the last meeting before Gonzales leaves office on June 5. The city’s Zoning Commission will consider the case on June 1.

Gonzales said she is gathering information about the family’s request and is not yet sure whether she will support it, though she noted that the family has long struggled to find a way to use the building and that the city declared it a “dangerous premises” after its roof caved in following a recent hailstorm. Though the site of the building has historic significance, the structure itself is in her opinion not historic, she said.

“There are other buildings around here that are very obviously historic that I believe have a future use and future potential. This one, I think, looks by the naked eye to be a dangerous premises,” she said. “It’s just a cinderblock building.”

“There are ways that they can incorporate the significance without necessarily having to keep the building, the structure itself,” she added. 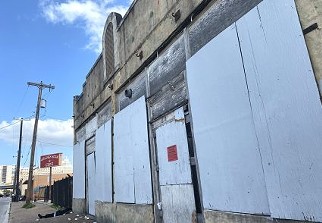 Miller disputed the idea that the building itself is not historic.

“We definitely think that it is historic, and it is contributing. Now, that’s not to say that a partial demolition or something like that might not be an option,” she said. “Unfortunately, there weren’t really avenues explored by the applicant in terms of reusing the building, or maybe partial demolition and reusing some of the building.”

The Lim family did not submit the necessary information to show the city that the building is beyond repair, and that maintaining it causes economic hardship, Miller said—an important criterion when asking permission to demolish a historic structure.

Developers have been approaching the family to inquire about buying the property—which spans 1.13 acres on the western half of the block bounded by Houston, Leona, Commerce and Frio streets—but the family has been unable to sell because of the presence of the Whitt Printing building, said its attorney, Patrick Christensen.

No development is currently planned for the site. When the demolition request was considered on May 5, HDRC members said the lack of a specific development plan contributed to their decision to vote against it, 6-1.

The family is “at the end of their ropes,” Christensen said in an interview. “They have a property that people want to buy, but they can’t sell because there’s a cinderblock building there.”

“We feel we are doing the right thing, and we hope that the commissioners and the council will see it our way,” he said.

Yet the request faces strong headwinds. City staff is recommending that the Zoning Commission deny it. Several West Side activists have come out in opposition, saying that its approval would continue a longstanding pattern in which the city has allowed historic buildings on the West Side to be demolished or to crumble away without investment.

“It’s ugly, it’s hateful, it’s disrespectful, and it’s becoming more and more that way at City Hall,” said Graciela Sanchez, director of the Esperanza Peace and Justice Center. “I’m very angry, but it’s also not a surprise, because this is how they’ve been treating the West Side for the hundred-plus years that my family has lived in the West Side.”

In discussing the Lim family’s request, several activists cited the example of a 2013 decision by the HDRC to allow the demolition of the Univision building, which had been the site of the first Spanish-language TV station in the U.S., to make room for the Agave apartment building.

Developer David Adelman is now asking the HDRC for permission to tear down two historic buildings at 900 W. Houston St., across the street from the Golden Star, so that he and a business partner can build apartments and retail.

After suffering from decades of neglect, giving rise to problems with homelessness and crime, the West Side now faces the challenge of absorbing a wave of development driven by downtown’s economic boom. The Golden Star is two blocks north of the University of Texas at San Antonio’s downtown campus, which is set to swell with the construction of academic and athletics buildings, student housing and parking garages.

“We don’t want to lose any more of the structures, if we can help it,” said Leticia Sanchez, co-chair of the Historic Westside Residents Association.

She fears that by approving the request, city council would set a precedent allowing more parts of the city to be stripped of their historic designations. “We’re trying to protect our community, but we’re also trying to protect the city,” she said.

The Conservation Society of San Antonio has come out against the request. In a letter to the HDRC, its president, Patti Zaiontz, stated that the building is part of the “important legacy” of Spanish-language publishing in San Antonio and that there appears to be no imminent threat to its structural integrity.

The steering committee of the Tier One Neighborhood Coalition, a group of neighborhoods in San Antonio’s urban core, is opposing the request out of concern that its approval would undermine the city’s historic approval process, said committee member Tony Garcia.

“This opens up an avenue for developers to come in and request a removal of historic overlay of any building that they would like to demolish for development,” he said.

Built around 1930, the Whitt Printing building has a façade exhibiting the Mission Revival architectural style, with a parapet, colored tiles and stucco texturing, according to an HDRC report. Gilberto Whitt founded the Whitt Printing company there after fleeing the Mexican Revolution in 1914, and the business operated there until 1977, the report says.

Gonzales raised the possibility that the building could be saved, and adapted to another use, with the help of city incentives.

“If the city is willing to help, by putting financial dollars toward the project, maybe there can be something else done,” she said. “One of the problems I’ve always had is that we determine buildings to be historic, but we don’t put any money into helping the families restore them.”