Listen Up, Movie Buffs: Eight Film-Themed Podcasts From Texas to Check Out If You’re Out of Eye Space 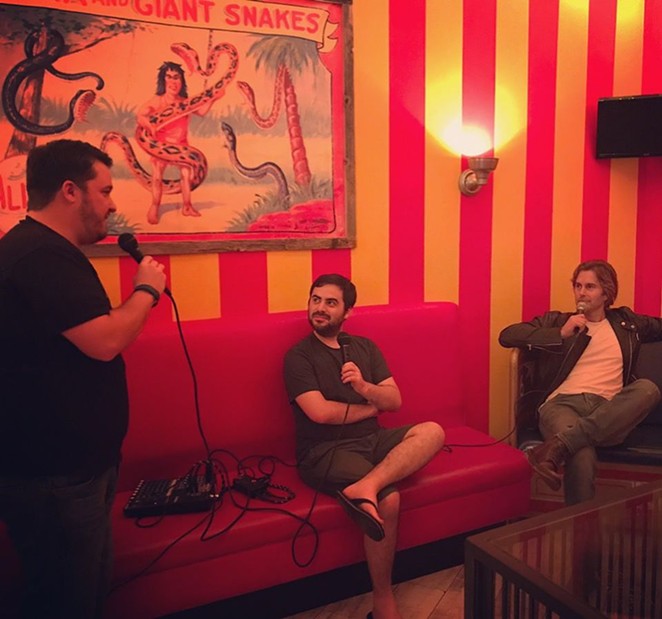 If you’re a film buff but need a break from streaming all those movies and TV shows during quarantine, here’s an idea: try downloading a movie podcast. Same goes if you’re looking for more cinematic insight but just aren’t ready to go back to the theater yet.

Plenty of Texans are putting together movie podcasts right now, giving us a wealth to choose from across the vast landscape of digital platforms. We’ve made things easy and compiled a list of some of great ones to start with.

Hosts Julio Olivera and Alex Mattis have some unpopular opinions. Which is exactly why they’re worth listening to. Currently on its 108th episode, their Austin-based podcast takes pride in “trashing movies everyone loves and praising movies everyone hates.” In recent episodes, award-worthy films such as Boyhood and Blue Velvet are put through the ringer, while a critical bomb like The Hangover III is celebrated. Olivera and Mattis just started their series “Summer of Winona [Ryder],” so listen in if you want to hear why they think Beetlejuice doesn’t star the ghost with the most.

Fans of mainstream and blockbuster fare might want to tune in to the three different active podcasts under the San Antonio-based DelfinPod network created by Emmanuel Delfin. On the most prolific of those, Revenge of the Sequel — now on its 124th episode — Delfin and crew chat about movies including Zombieland 2: Double Tap and Scream 4. Then there’s Countdown to Infinity and Countdown to Skywalker where the topics of discussion are movies in the Marvel Cinematic Universe and the entire Star Wars catalog, including that Baby Yoda show nerds seem to like.

Get Your Geek On

The San Antonio-based podcast Talkin’ Geek produced by Get Your Geek On, isn’t exclusively about movies, but the team of podcasters cover plenty of fanboy cinema, including Star Wars and Marvel properties, in addition to comic book and video game news. Recently, host Robert Haley said the group wants to take the podcast in a new direction and announced they won’t return with a new episode until pandemic restrictions eased up and they could get back in their studio. So, for now, push pause on these padawans.

How Have You Not Seen This?

From their living room in Houston, husband and wife Daniel and Tracy Carlson introduce each other to movies that one of them has seen and can’t believe the other hasn’t. The podcast has been going strong since late last year, and the couple has so far screened anything from Rosemary’s Baby to Four Weddings and a Funeral. During their most recent episode, Tracy shares 1983’s Valley Girl with her hubby, who enjoyed the rom-com’s poppy soundtrack and time-travel aspect, even if he found the screenplay far from tripendicular.

Now in its seventh year, this Dallas-based podcast is hosted by Emmy-winning producer Kent Garrison, film critic Brian Gill and humorist Richard Bardon. Recently, the trio has been on a bad-movie binge, devoting an episode to the Will Smith debacle After Earth and a conversation about 1995’s Theodore Rex, which the podcast calls “the Casablanca of family-focused, science-fiction, talking-dino movies set in the future that also star Whoopi Goldberg.” There has to be an Oscar for something like that, right?

Fairly new to the podcast game, this San Antonio-based show includes movie reviews, discussions and retrospectives from hosts Chris Lowell, Lionel Mendez and Nicholas Bass. Episodes cover a wide range of film topics — from 1992’s Belgian black comedy Man Bites Dog to a couple of shows dedicated to the hosts’ favorite movie villains. Earlier this year, Videodrome Cinema went full meta when they reviewed their namesake, David Cronenberg’s 1983 cult classic Videodrome. It probably wasn’t as scary as the experience they had a few weeks later when they reviewed Cats.

Why Was This EVER Cool?

Hosts Cody Green and Shayla Williams are here to destroy your childhood. The Houston-based podcast, which just hit its 100-episode milestone in March, features a conversation about a movie the duo liked when they were kids. Green and Williams rewatch the film, usually from the ’80s or ’90s, then ponder their podcast’s title question. In a recent episode, they revisit director Baz Luhrmann’s 1996 Romeo + Juliet and brand it a “disasterpiece.”

Podcasters and film critics Cody Villafana and Jerrod Kingery at San Antonio-based CineSnob.net run the weekly CineSnob Podcast, now on its 163rd episode of reviewing recent theatrical and VOD releases. The pair’s other podcasts include Re: MCU, in which they rewatch and reevaluate Marvel movies, and Quaranstream, during which guests such as actor Greg Sestero (The Room) talking about the pandemic’s impact on the entertainment industry. The show ends with everyone trading streaming recommendations for those lonely quarantine nights. Full disclosure: This writer is the founder and editor of CineSnob.net.

Other notable Texas movie podcasts include After the Credits, Customers Also Watched, Double Toasted, Highly Suspect Reviews and Junkfood Cinema, all from Austin. Houston also boasts GUTS, Texas Podcast Massacre and Houston, We Have a Podcast, while Dallas represents with Reel Me In.

Film Texas podcasts film podcasts things to listen to Texas podcasters The Contrarians DelfinPod Get Your Geek On How Have You Not Seen This? Mad About Movies Videodrome Cinema Why Was This EVER Cool? CineSnob