Not long ago, I stumbled across a review of an Aretha Franklin
reissue that said something to the effect of, if similar recordings by a comparable male artist were being released, they’d be greeted by 10 times the hoopla.

True enough. We’ve certainly seen allegedly “must-have” box sets boasting far less treasure than the cumbersomely titled two-disc Rare & Unreleased Recordings from the Golden Reign of The Queen of Soul (Rhino), and I’m sorry to have overlooked the October release in my busy fall schedule. Gathering takes recorded from 1966 through the early ’70s, it’s a bonanza offering both alternate, raw versions of hits (the lust-dripping “Dr. Feelgood”) and curios like covers of The Beatles (“The Fool on the Hill”) and the Blue-Eyes anthem “My Way.” The latter’s kind of a hoot, but most tracks here are far more than mere curiosities. 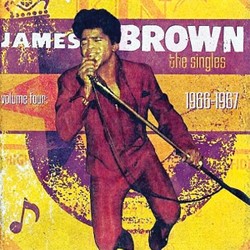 The fall had no shortage of worthwhile soul and R&B reissues, in fact, that didn’t get as much attention as they deserved. The same month as the Aretha release came the fourth installment of the chronological series James Brown: The Singles (Hip-O Select). Documenting the astonishing quantity of killer material Brown made at his height — even if you’ve invested in the fantastic Star Time box, you may be shocked — the series puts hits (“It’s a Man’s Man’s Man’s World” comes early in Vol. 4) alongside all the promotional oddities, b-sides, and, yes, Christmas standards that a fan could want.

Hip-O Select had a somewhat harder sell with In Our Lifetime?, a Marvin Gaye LP that dates to a painful period in the singer’s life and led to bad blood between him and Motown. In fact, Gaye terminated his two-decade relationship with the label after they tinkered with the album’s mix and running order and even dropped the question mark from the title. The two-disc reissue presents the full 1981 album both as originally released and in an alternate mix, then goes on to showcase tracks that only recently came to light, recorded for a never-finished “party record” meant to be called Love Man — recordings that are fleshed out and compelling, not what you might expect from tapes hidden on a shelf for decades.

Another late-period gem from a master, albeit one less famous than Gaye, is Lonely Just Like Me (Hacktone), the final album made by Arthur Alexander. If you don’t know the name, you know his songs: As the album’s package boasts, Alexander is “the only writer in history to have his songs covered by The Beatles, The Rolling Stones, and Bob Dylan.” Despite having penned “Go Home Girl” and “You Better Move On,” both of which appear here (the latter in a bonus-track “Fresh Air” appearance), the songwriter was driving a bus when he cut this comeback album for Elektra/Nonesuch’s “American Explorer” series (which was also the home of Jimmie Dale Gilmore’s breakthrough After Awhile). This reissue adds that “Fresh Air” performance and a live track to the original album, but the highlight is a four-song recording made in a hotel room while producer Ben Vaughn was trying to convince Alexander to make Lonely: With just a guitar to accompany him, the singer is convincingly forlorn on the Neil Diamond cover “Solitary Man.”

There’s a Riot Goin’ On
The Coasters
(Rhino Handmade)

I may be late to the party on the reissues above, but not on There’s a Riot Goin’ On (Rhino Handmade), a four-disc comp of The Coasters. The teen-friendly goofiness of the band’s big hits — “Yakety Yak,” “Charlie Brown,” “Poison Ivy” — may threaten to consign them to the novelty bin, but how many novelty songs can stand up to so many years of listening? Spin these 45s without paying attention to the lyrics, and you’ll hear rock ’n’ roll as spirited and catchy as any — no wonder they were the first group inducted into the R&R Hall of Fame.

Rock and Roll
Clyde McPhatter and the Drifters
(Collector’s Choice)

Casual R&B listeners inclined to confuse The Coasters with their movement-verby cousins The Drifters, whose Clyde McPhatter also entered the Hall of Fame in 1987, won’t make that mistake when listening to Clyde McPhatter & the Drifters, a straight reissue of the vocal group’s debut. The star singer’s heartfelt warble has undeniable charms, but even on the comparably saucy “Money Honey,” the band never encroaches on The Coasters’ rambunctious turf.

Finally, one-time Drifter Ben E. King had his first solo hit with the wistful romance of “Spanish Harlem,” which gets reworked twice (once with vocals by James Hunter, once instrumentally), on The Harlem Experiment (Ropeadope), a contemporary take on the varied genres to emerge from or be transformed by that storied neighborhood. Pairing jazzmen like Don Byron with Latin instrumentalists, singers, a DJ, and even archival recordings of Malcolm X, it’s an irreverent, occasionally goofy stew that reminds R&B fans that not all entertaining recordings were made prior to 1975.•