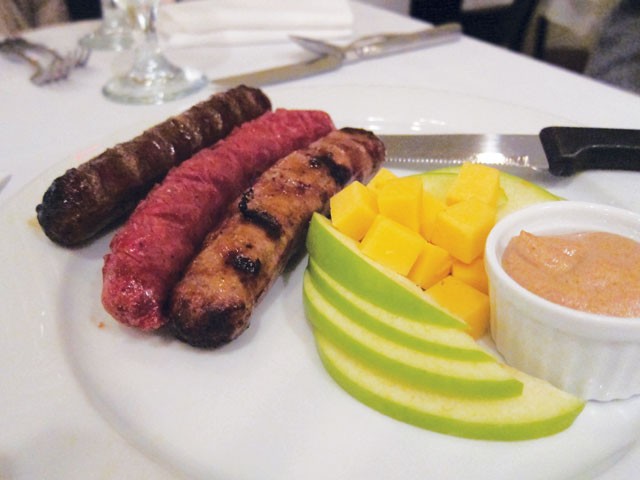 Little Gretel’s owner/chef Denise Mazal started her journey into the kitchen by observing and replicating her mother’s techniques at her Czechoslovakian restaurant in Prague. One day she left to travel Europe, working at a variety of restaurants in various countries. Those regional influences accumulated by her travels are recognizable in Boerne-based Little Gretel’s variety of dishes. Before opening Gretel in 2009, however, Mazal spent two decades at Boerne's Ewe & Eye Toy Shoppe honing her business sense and eye for detail. Before she knew it, her daughter Veronica was grown, asking is she were ready to do the restaurant together.

The time to plan was a boon, Mazal says.

“It was important to know what the town would want to eat, and I knew I could deliver it,” she said. And she's spent every day since opening “making things better by adding this and taking off that.”

As a former military brat who spent her formative years in Germany, I found an authentic brat in Chef Mazel’s wurst. The three-year-old well-apportioned eatery offers the authentic tastes of childhood as well as more familiar-tasting dishes. As Mazal tells me: “Food should have no boundaries. Austrian schnitzel, Czech dumplings, Hungarian goulash are all dishes multiple central European countries identify with.”

My introduction began with the tasty potato pancakes served with homemade apple sauce, smoked salmon, and sour cream. Although the escargot was too salty on one visit, the meat’s texture was cooked to a tender perfection that merited another try. The wild game sampler was a generous appetizer (or meal if you didn’t want to share), served with buffalo, venison, and wild boar sausages, and a spicy whole-grain mustard. You can add an unassuming side salad to your entrée, but I recommend splurging for the organic Bibb lettuce salad, which immediately took me back to my favorite Bavarian restaurant. All meals include the fresh-made rye bread and softened butter, an easy filler.

The savory Sauerbraten with dumplings and traditional dollop of cranberry sauce satisfies any Central European craving. A loose English translation of sauerbraten is a pickled, slow-braised meat so good that you don’t want to share with dining companions. That definitely translates here. During my most recent visit I enjoyed the night’s special — roasted duck and rabbit served with sautéed garlic spinach, not-too-sweet red cabbage, and Czech-style dumplings. Our youngest dining companion didn’t mind the absence of a kid's menu, relishing the veal schnitzel and devouring every bite of spaetzle, a buttery type of egg noodle. The stuffed pork chop was also good, though fairly carried by the raisin-caramel apple stuffing and accompanying potatoes au gratin. At first I was disappointed to see the Czech-style potato salad look more American than anything else, but I was immediately cheered me up with a familiar vinegary kick.

For dessert we went traditional with the homemade apple strudel that was served with cinnamon ice cream and topped with Chantilly cream. Plan to leave enough room to share this experience with friends.

And don’t forget to enjoy one of the rotating selections of Czech, German, or Belgian draft beers served in an hourglass mug in a small wooden stand.

Mazel regularly invites top chefs from the Czech Republic to cook in her restaurant. She also returns the favor every time she returns to Prague. Corn has never been commonly found in Czech recipes, but after a few trips she noticed her favorite recipe for cream corn featured at one of her friends’ Prague restaurants.

But be warned: Little Gretel is a “family affair that everyone is involved in.” You may even get hooked yourself. Says Mazel: “Once you eat at my restaurant, you become my family.”