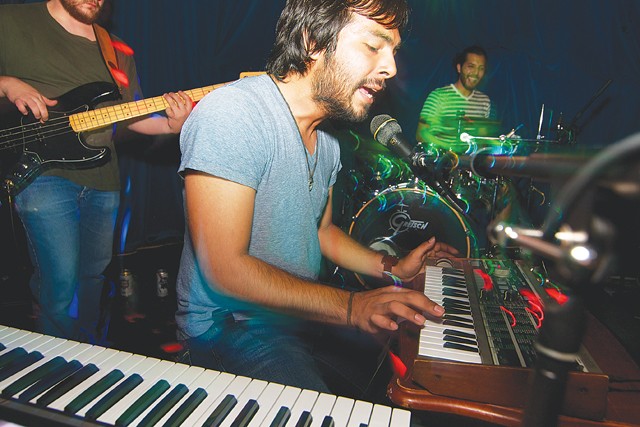 Self-described as “a fusion of new and old sounds,” four-piece Aria Satellite is still a fledgling project, but they manage to put on an impressive show, combining clear, high-energy arrangements with melodic emphasis and poignant interludes in just the right places. Honestly, I wouldn’t mind hearing an entirely instrumental show from them.

Manuel Rodríguez, sitting front and center between a regular-sized keyboard and MicroKORG synthesizer/vocoder, is on pitch, but the mic levels aren’t turned up enough for us to hear the lyrics. A fellow attendee says I should cut the singer some slack due to technical issues such as bad levels, balance, and — worst of all — an overwhelming amount of feedback before and after every song.

When comparing sounds, name-dropping different bands inevitably draws haters out of the woodwork, particularly if they happen to be super-aficionados or if the names dropped are established acts. But as it’s hard to compare the experience of flying in a Cessna to getting real with the set-up on Air Force 1, I’m going to go there now. Bear with me.

Guitarist Art Bautista does it all: soulful solos and lively riffs. A few times I got distinct Modest Mouse “Float On” déjà vu (for you mainstream folks, the sound I’m referring to is the guitar sample from Lupe Fiasco’s newest radio banger). Noticeably outshone, bassist Zach Tichenor looks disinterested — his smoking onstage is as obvious as the lackluster bass lines. The energy comes from drummer Alex Alarcón, whose jamming is playfully on point. As a whole, the band greatly benefits from Alarcón’s stage presence, delivering a sound resembling throwback Kings of Leon sans vocals meeting Explosions In The Sky’s epic crescendos — offering audio proof of that rare day stoners feel inclined to headbang.

“The Beginning End” is the crowd’s obvious favorite. The intro rocks and dancing ensues, encouraged by a stellar arrangement that showcases Rodríguez’s bouncy electronics. Think ambient M83-meets-Minus The Bear’s singsong styling. Each construction moves the crowd like a storm brewing over the ocean; the waves rock you as they build, peak, then return you to smoother sailing.

Aria Satellite is currently in the process of cutting a demo. Eventually, they hope to get signed and keep up momentum in the scene, all while pushing the limits of an experimental soundscape that is definitely worth seeing in person.