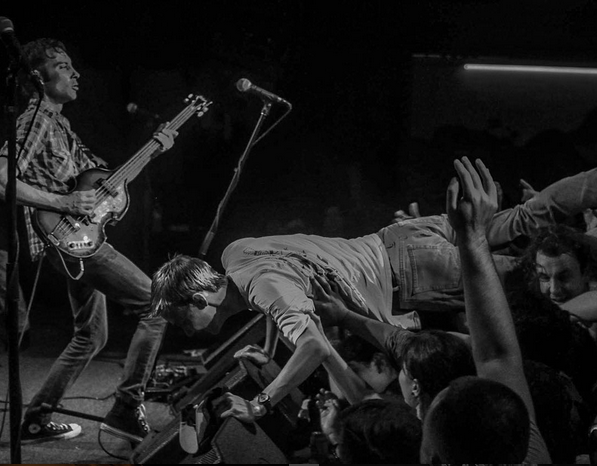 The first time I saw the Black Lips was back at FunFunFun Fest in 2013. Like a Hollywood spectacle, Val Kilmer wielded a prop chainsaw and bowie knife to destroy a guitar amp, spurring to an already chaotic set from the Atlanta quartet.

Unlike most indie-rock bands that have already bid adieu — The White Stripes, LCD Soundsystem — the Black Lips have been around for more than 10 years. So seeing them for the second time at the Paper Tiger, it made me question how long can these guys keep up the act of being those guys that don’t give a shit. I guess the answer is as long as they want to because despite all the cacophony and crude antics, the Black Lips can write hit after hit after hit.

Paper Tiger couldn’t have been more of a fitting venue. With bassist Jared Swilley dressed in plaid, distressed denim and converse and Cole Alexander in a loose shirt and bleached jeans, they looked like your favorite band you would see every weekend in your friend’s cramped garage. Their set was a frenetic hour-long set spanning a decade-plus material of messy garage-rock anchored in that vintage, musty record store atmosphere.

Songs like “Veni Vidi Vici” and “Bad Kids” lent a grinning, toothless charm as the crowd joined in an incantatory scream of “bad kids all my friends are bad kids” as others rushed in a frenzied moshpit with a drunken stupor. These are the type of guys that write about those juvenile, shamed experiences we all want to forget sometimes: from sharing old Newports, pissing in cups or getting unwanted tattoos. But maybe it’s that irresponsibility and raucousness that appeals to the bad kids in all of us.