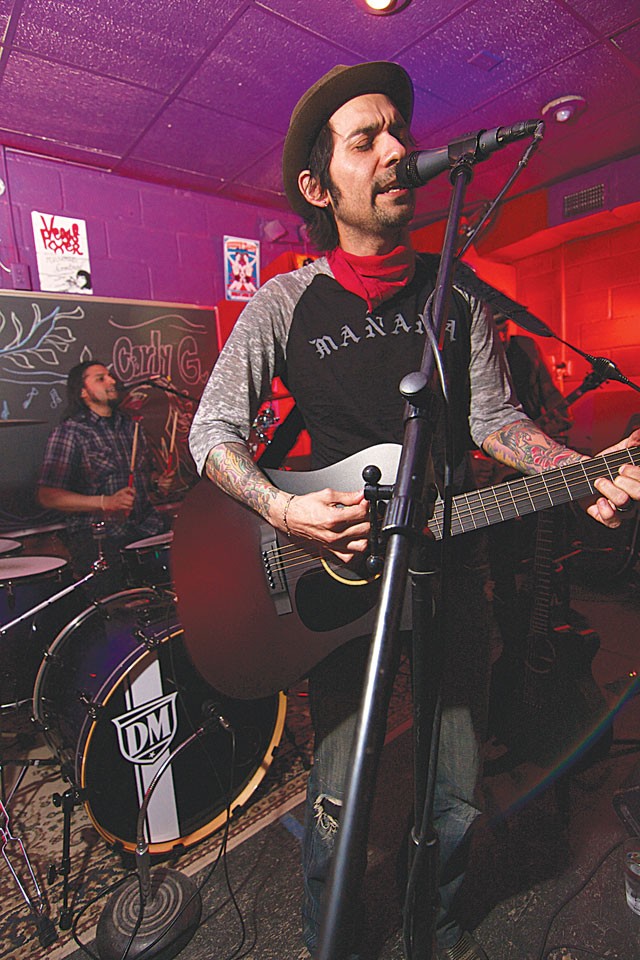 Boneshakers, that claustrophobic bicycle bar with scattered lighting and thin crowds, felt like “Anybar, USA” last Friday night. All that was missing was a band playing songs of heartache and longing. Enter Blackbird Sing.

Vocalist/songwriter Robert Salinas is unbounded in his sentimental lyrical kernels, delivered on the wings of a band in love with pop-country and campfire folk. He cut to the schmaltziest part of the human soul singing lines such as, “These intentions are just misfires of the heart,” “You only love the things you can’t find,” and “For the record, you were always right” throughout the set. With such musings at the ready, I half-expected Blackbird to launch into a mellow cover of “Living on a Prayer,” an accusation I don’t mean as an insult. Every listener needs some frothy, sad-sack pop, including attendees this night. Most of these folks sat back, sipped a brew and mouthed the words to themselves in silent reverie.

Highlights included the “Pessimistic & The Lions Will” and “Hales.” The former is a jangly, sweet ballad that Blackbird played with tremendous restraint. Even when Andy Salazar produced a trumpet to add some heroic flourish, the subdued vibe was not sacrificed. The latter was an upbeat bouncer channeling Heartbreak-era Ryan Adams and early ’90s Mavericks. Salazar on electric, James Magallanez on the harp, and Salinas on whistle took a round of quick solos, giving the track a lean pop presence. Nothing embellished, nothing incomplete. Meanwhile, closer “Goldenboy” brought Blackbird into much-needed arena rock territory. It was much needed because Blackbird, to the joy of their audience, were too intent on staying chill. Two times different band members told the crowd they were “going to speed it up” before launching into tracks that still could qualify as ballads. Meanwhile, drummer Daniel Magallanez and the rest of the band weren’t always in sync, and his brother James either couldn’t or wouldn’t cut down to a single note playing harp melodies. It was also clear that Salinas is taking his vocal journey in earnest, his western trills not always finding their mark.

That said, vibe and vibe alone have served Blackbird Sing well. They enter the finals in the 2011 Shiner Rising Star Competition this month. It also seemed good enough for at least one beer-less girl staring intently from just inside the door. It was obvious, Blackbird was singing for no one but her that night.