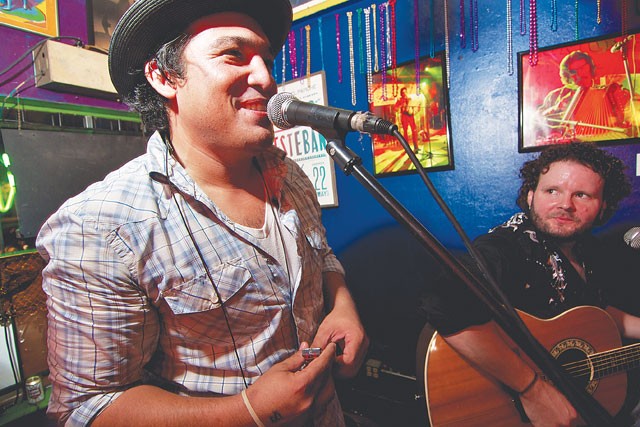 Chacho and Brance came out of nowhere to steal a spot in the upcoming Troubadour, TX television series that begins airing in September on the CW network and NBC affiliates. The production, a docu-reality show, will follow the duo, as well as local singer-songwriters Nicolette Good, Little Brave, the Texas Ladybugs, and Stephanie Urbina Jones. More than 20 San Antonio performers auditioned; they did so well there is a good chance other names will be announced soon, according to show producer Erin Gardner.

And while Troubadour, TX is not a competition, on Saturday night at Saluté, Chacho and Brance were at match point: In a single night, they had to prove that the TV gig was not a fluke — that despite a low-key presence in the local music scene they’re more than a novelty act. Mission accomplished.

The duo goes from country-rock and gospel-folk to Delta, Chicago, and Hill Country blues with equal conviction, but it is the blues element that defines them. Singer Lorenzo “Chacho” Saldaña exhibits traits of some of the best: the timbre of a Stevie Ray Vaughan, the darkness and warmth of James Brown, and the range and electricity of Janis Joplin. His voice is deep yet possessed of many shades; his rhythmic and melodic sense, superb; the songs, so real. He also plays a mean harp. While both play guitar, it is Brance “Pony Boy” Arnold that’s in charge of the tasteful solos (with or without a resonator guitar) and fine vocal harmonies (he could’ve used a little more volume). If Chacho is the heart, Brance is the duo’s pulse.

After only a few songs from their EP (recorded in Como, Miss.) Chacho and Brance had the packed house in their respective pockets. It was a relaxed but focused, sweaty, and powerful display of guts and musicianship, and had they continued like that it would’ve been more than enough.

Then the band came out, and a wonderful hell broke loose.

With only a handful of rehearsals together, the collaboration was tight, with guitarist Marc Sauceda proving himself to be a riff machine, Michael Volk precise on his bass work, and brother David Volk solid on both sticks and brushes in the back. But it was the sum of the parts that made the night. These were five guys bringing out the best in each other.

Of course, it was too perfect to be true. Somebody had to get in the way.

Before the show and twice between songs, one guy who claimed to be the promoter who brought the Stones to Montreal in ’72 got onstage to push the band’s CDs. “Chacho and Brance is the best music you’ve ever heard on North St. Mary’s,” he said, oblivious to the fact that a guy named Esteban Jordan had also played on the same stage. Besides, I don’t care if he discovered Lady Gaga or slept with the Pope: You don’t get onstage in the middle of the show to praise the band and sell CDs. You just don’t. It turns out neither the band nor Saluté’s management knew the guy. The show was flowing, and Colonel Parker had to interrupt it twice. The third time he wanted to jump in, Chacho wisely told him: “It’s cool, man. I got it.”

Chacho and Brance are a rare case of party with substance, and a new musical power in the local scene. How big? It’s up to them.

If they’re happy with just playing as a duo with guitars and harps, fine — that would make them one of the best local acts and arguably the best blues act in San Antonio. Not bad. But if they convince Marc, Dave, and Mike to continue the party, or if they find similar musicians (good luck) and perform as a quintet, well, folks, that would mean there is a new Sheriff in town.