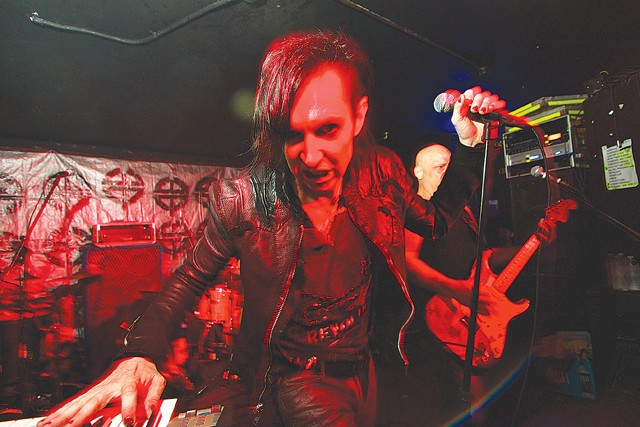 When it comes to reunion shows, there’s no escaping the disconnect between a band’s image and the change that comes with years. But as Evil Mothers closed a surprise three-city reunion tour June 11 at Nightrocker, something greater than the spectre of pounds gained and images tamed loomed over the show. “Thank your lucky stars tonight that we have another day to fucking sweat,” said bassist Patrick Sane to the packed, steaming, delightfully pissed house.

Sane listed off the names of friends and colleagues of the band, including Roy Garza, who had died recently. Post show, Sane described them to the Current as “friends that we sat together and cried with and drank with.”

It was perhaps the memory of old friends that charged Evil Mothers’ cynical brand of industrial rock this night, for this reunited group of 30-somethings played with the ferocity of a gang of angry younger men. “This is the most powerful lineup we’ve ever had,” frontman Curse Mackey said after the show.

Made up of mostly veteran bandmembers (save the new metal percussionist Bradley Bills), Evil Mothers brought a moody air to “Hardware” — complete with improvised trashcan percussion from Bills, ominous guitar work by both Bobdog Catlin and Sanford Allen, and what sounded like a hilarious 1950s recording discussing the etymology of the word “fuck” — which eventually gave way to grinding, ear-splitting riffage. On “Blowtorch,” Evil dive-bombed the opening guitar notes in unison, creating a swooping sucker punch of noise. They also trotted out classic showpieces: Catlin using a bow on his guitar for “Bad Blood Flows” and the group playing trashcans (one of them emitting flames to the ceiling) and propane tanks on the tribal “Orisha.”

Evil Mothers write songs about burning (either the city of San Antonio or oneself), but with Nightrocker hotter than two gerbils fucking in a wool sock even Allen of the all-black suit took off his sport coat at one point. “Where’s your coat, pussy?!” Sane joked. “I thought I knew you.”

Mackey discussed all the work that went into the three-show revival: “I feel great … but yeah, it takes just as much work to put together three shows as it does 30. The hard part is getting prepared, the easy part is playing.”

Leading us to ask: Are there more shows on the horizon for Evil Mothers?

“I’ll definitely do select shows if it’s the right situation for us.”