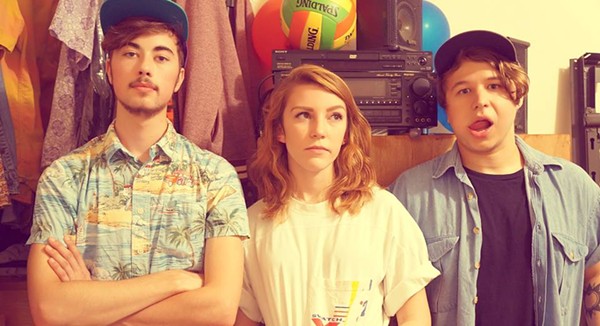 On Sunday night, one of the Alamo City’s best and most prolific young bands, Islands & Tigers, played a homecoming show at The Ten Eleven, after having been on an 11-date southwestern mini-tour. We went into the affair with the mindset that, after so many dates in a relatively short time, the band would either be at the top of its game or a bit worn down. Fortunately, it was the former.

We made it to the venue just in time to catch the band before Islands & Tigers, DFW's Animal Spirit, which impressed with its sinuous and stomping thrash-abouts featuring Latin percussive twinges, pretty but raw garage punk and jangly and urgent psych-surf.

When Islands & Tigers took the stage, shortly after 11 o'clock, the place immediately took on an atmosphere of exuberance and kinship. To be sure, half of the crowd was made up of the members of the opening bands, but, hey, that’s what happens on a Sunday night. The band certainly made the most of its time on stage.

To kick things off, the four-piece played a sped up (near furious) rendition of the home sick, yet sunny garage rocker “Groundhog Day” off of the I’m Afraid of My Brain EP. As the crowd pushed forward, many singing the lyrics at the top of their lungs, the show truly began to feel like a homecoming, even as the song’s lyrics bemoaned alienation and loneliness. Then the pop-punk of “Give Up on Your Lover,” from the Failed Attempts EP, gave way to two songs (“Alone On New Year’s Eve” and “Give Me Anything”) that you could easily confuse for early Strokes efforts, if it weren’t for Dane Rousay’s impeccable drumming and Zoe Windham’s bright backing vocals.

For me, the 12-song set's best moments were the moments where lead man Bobby Rivas' slack-jawed delivery was given freest range. His voice, like the group's compositions themselves, really is the very quintessence of pop-punk. The show's final three songs—"Best Wishes," "Do You Wanna Come Back Home" and "Nostalgia"—truly showcased, in most dynamic fashion, the extent of this band's heart and it's promise. All three songs express, in loose and frenetic grunge-pop packages, the longing for connections lost and places populated with the particular pride and promise of youth. You should have been there, it was the twee-est fuckng mosh pit ever and there was, for that hour or so, nothing that mattered but these arresting and joyfully sanguine songs.

It’s a tricky tightrope that Islands & Tigers walk, celebrating their musical heroes and allowing themselves to be influenced, yet trying to maintain an unique and fresh identity as a band. But, as much as some of the group’s songs might call to mind The Strokes or Harlem Shakes or Weezer, it is, upon closer examination, just a passing resemblance. Islands & Tigers are their own (very talented) band and, led by Rivas’ restless creativity and simultaneously pop and punk sensibilities, they are doing what they do better than so many bands with much more experience.

You can, and should, download all four EPs I & T have dropped over at their Bandcamp page.