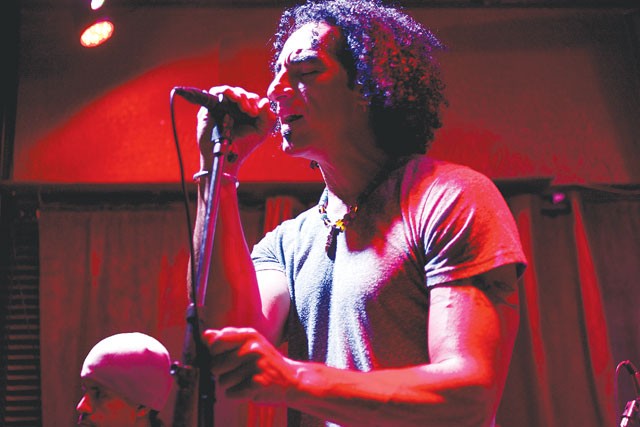 “What you’ve got to capture is the vibe,” Jai Roots told the Current on the curb outside España Bar de Tapas after his show on Friday, July 22.

Jai Roots played España with his Herb-n-Café Project, a three-year creative endeavor that blends Latin jazz with reggae, funk, and rhythm and blues. It’s mercurial both in sound and cast. It was only drummer Mike Alexander’s second gig and bassist Will “K.” Kenon’s first. Marry those elements with España’s watered-down drink selection and Roots’ work was cut out for him.

The first set started in earnest, with Herb-n-Café playing through chilled originals like “Cómo quisiera” and “Cannot Be,” and Poncho Sánchez’s “Bésame Mamá.” Sound with an electric-and-acoustic septet can be a nightmare, but Herb-n-Café filled the club with sparkling tone color. Alexander and Kenon played as if they had been in the group all of its three years. Meanwhile, the band kept the songs loose. Guitarist Carlos Trevino opened most songs with an offbeat reggae lick, while Kenon, percussionist Carlos Brunicardi, or keyboardist/saxophonist Anthony Martinez took solos. Every number was lush and deliberate, even in the second set, where more dance-friendly tempos took over.

The result was something hypnotic. Herb-n-Café isn’t a boring band (though Martinez tends to noodle on the sax), but my mind wandered the way it might while staring at a sunset. While the band’s chemistry is undeniable, I had no trouble following any player’s unique sonic journey. Roots was at the center of it all, spitting a free-style here, slapping the congas there, hitting the mic stand with drum sticks after that.

This was all deliberate, Roots said. When I told him I felt that his band’s unrushed approach lent itself to cerebral meandering, he said, “That’s it! You get it!” He credited dance floor peeps for improving his “urban roots, ragga music,” but said that he plays ultimately for the people in the corner of the bar, nodding their heads over a stiff drink after a long week.

Time and again, our conversation was interrupted by strangers thanking Jai for his performance. Just then, I realized that even if I don’t know when my next neck-snapping Ten Eleven hardcore show will be, I definitely know which band I’ll see after another 60-hour work week.