Live and Local: Macklemore & Ryan Lewis at The Majestic Theatre

Last night marks Macklemore and Ryan Lewis’ first time performing in the Alamo City and the second stop on their European/American tour. The duo is touring in promotion of their mysterious follow up to 2012’s Grammy-winning The Heist, and like conscious rocker Bono before him, Macklemore, despite being polarizing for his “good guy” image, knows how to deliver the goods in a sold out concert.

Macklemore and Ryan Lewis’s entourage, made up of a pianist, multiple horn musicians/dancers, an opening Christian rapper (Xperience) and a mini, three-piece choir, basically turned the Majestic into a swinging Baptist revival, complete with a projected digital stained glass window. 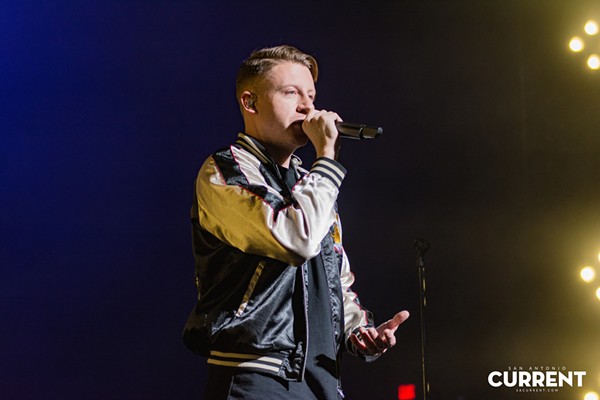 In-between songs, Macklemore made many San Antonio references, making up for lost time. For example, before nosediving straight into the song that put him on modern pop radio, Macklemore joked about going to the local Goodwill instead of checking out “the big mall by the airport.” He then gushed over his affinity for Texas culture: armadillo leather boots and cowboy hats. Good luck finding a pair of genuine Armadillo boots for 99 cents, Macklemore. 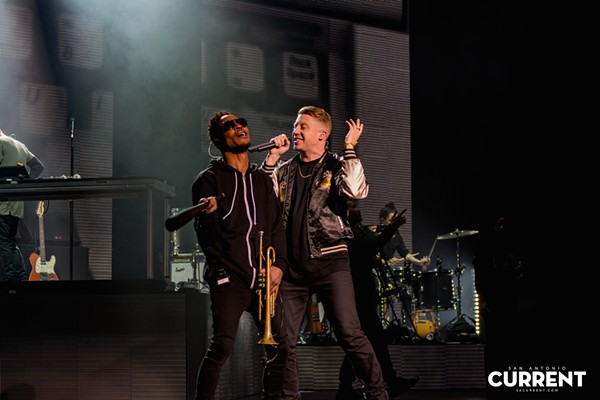 When the mustachioed crooner Eric Nally burst onto the stage for his theatrical “Downtown” chorus, it felt more like the Majestic’s Broadway series than a rowdy hip-hop concert. Foxy Shazam’s Nally was the only well-known guest artist to make a surprise appearance at the show, making his presence even more show-stopping as he danced and belted his way through the headliners' recent single.

Paying tribute to his fallen idol David Bowie with a larger-than-the-Goblin King’s-crotch-bulge performance of “And We Danced,” Macklemore (as his alter ego "Sir Raven Bowie") hopped around the stage clad in a platinum mullet wig, swirling bedazzled cape and a faux-British accent.

Like a rap game Conor McGregor, current UFC champion and Ireland’s national treasure, Macklemore is so proud of his Irish heritage that he ran out onto the stage with a massive Irish flag amidst orange and green streamers during the more-than-appropriately-titled “Irish Celebration.”

After numerous encores, the show was closed with "Can't Hold Us," the Seattle duo's second number-one hit off The Heist and a shout-out that his new album is complete. An Evening with Macklemore and Ryan Lewis is just what you'd expect from a multi-platinum artist who still wears his gold-plated heart on his sleeve.