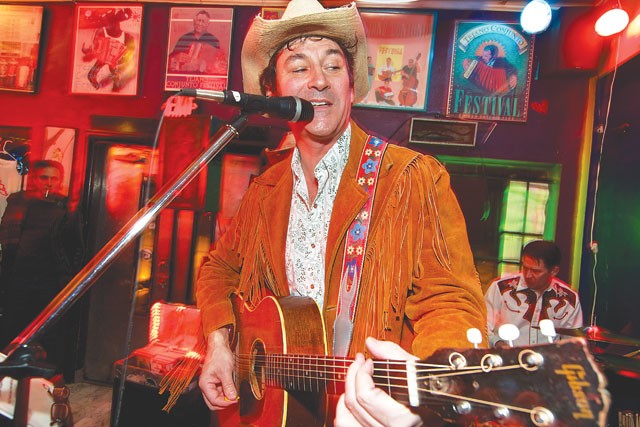 Midway through Mitch Webb's set at Salute, a guy opened the door, took a quick look inside, grabbed his head in amazement, and left. I couldn't hear what he said, but I could read his lips: "Damn!"

For a few seconds, he had been a witness to one of the most explosive local shows of the year, by a band that gets better with time. Webb and his Swindles completely pulverized Saluté, and it was a fitting wrap to the holiday party — and Doug Sahm tribute — organized by Margaret Moser and Michael Ann Coker's Texas Legacy Music Association.

Yes, there was the usual Sahm/Tornados/Sir Douglas Quintet homages ("Nuevo Laredo," "She's About A Mover"), but singer/acoustic guitarist Webb — whose own voice is a mix of Sahm and Elvis Costello — went well beyond that, with smoking versions of Butch Morgan's "Blubberball" and Freddy Fender's Tornados hit "A Man Can Cry" and, of course, "Before The Next Teardrop Falls." Webb's band is just as badass as he is, even without Big Dave Wasson (who was stuck in Fort Worth). Joe Reyes on guitar is a rare mix of subtlety and edge, bassist Odie looks like one of the bad guys in a Peckinpah Western but plays like an angel on energy drinks, and drummer Ed Gough is a Swiss watch with dynamite strapped on. And guess what: the sound at Saluté was great, courtesy of the band (it is possible, folks; nothing wrong with the room).

It was an unforgettable garage, country rock, and straight-ahead rock 'n' roll party that also had illustrious guests. After receiving an MVP/vocals award from TLMA, legendary PusiKat singer Joe Thomas showed he could still give James Brown a run for his money; Bennie Harp joined the party with always the right harp solo, and Jeff Smith (perhaps humbled and intimidated by these monsters) chose not to swallow the mic per usual, delivering instead a contained, cosmic country version of "Texas Ranger Man" (unlike the rock arrangement he does with the Hickoids).

On behalf of TLMA, which honors San Antonio and South Texas musicians and key players in the regional music industry, Moser and Coker used the night to announce the founding of the South Texas Popular Cultural Center. The not-for-profit center will open its door in May 2012 (watch 1017 E. Mulberry) to "collect, document, exhibit, preserve, and interpret South Texas music-related history and artifacts." In other words, they'll be reminding us (just as the Swindles did this night) that these older cats can still annihilate your average young dude. The announcement and show suggest 2012 will be a great year for local, older, rootsy music. The next natural step, I hope, is to put these guys together with the younger set to spark more collaboration and help create yet another new sound for the region. Until that happens, I'll continue following guys like the Swindles. Some kids may be louder, but no one does it better.