Coming in to Say Revenge!’s CD release party for Rough Night, Sugar? I knew what to expect 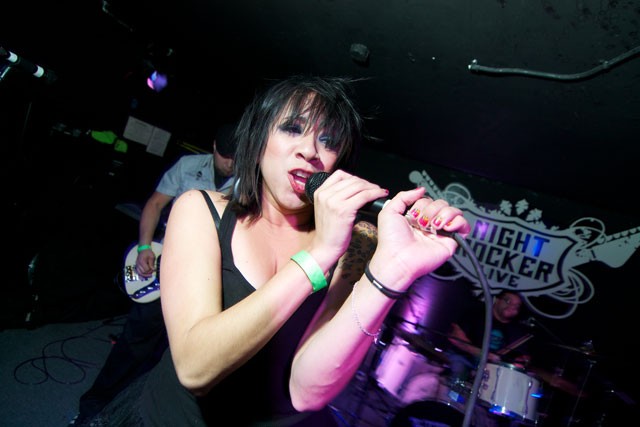 Coming in to Say Revenge!’s CD release party for Rough Night, Sugar? I knew what to expect — a fast-driving, feel-good, one-guitar attack from Maria Benavides, Christina Rodríguez’s clumsy walking and crazy wailing, and two guys (bassist Chris Compean and drummer Eddie Gutierrez, the latter also helping in vocals) doing their best to keep up with two girls that obviously run the show. But the show Friday at Nightrocker was more than that: it was the confirmation that no matter how good or bad you play, when you rehearse and give 150 percent, good things happen.
Say Revenge! doesn’t have one frontwoman, but two. Rodríguez is the singer, yes, and even though she stumbled on the monitor as soon as she started (as she often does), she knows how to work up a crowd. Benavides is just as charismatic, and even though she’s no virtuoso by any stretch of the imagination, she proved once again (as she had done on the album) that the band doesn’t need a second guitar. Helped in part, no doubt, by the El Perrito girls distributing cheap tequila shots at the club, the band’s fans were amongst the most raucous I’ve ever seen for a local band. Is it The Garage, Rodríguez’s webcast at woai.com, that made them so beloved? Is it the album? Whatever the reason, the front-row dancers in the packed club were absolutely crazy and the mosh-pit was unusually hardcore for a pop-punk band.

While Rodríguez jumped off and on stage repeatedly, Benavidez was signing autographs on guys’ tits. The band went through the album and had enough stamina for ferocious versions of the Cranberries’ “Linger” and Nancy Sinatra’s “Boots.” All four proved to be a band; no more, no less. They enjoy playing together and seem to be ready for the next step: keeping the fun alive while seriously and confidently concentrating on developing stronger material. “Good” isn’t enough anymore. The foursome’s live chemistry — especially the chemistry with the creative team of Rodriguez and Benavides — makes me think that once they have songs to match the jaw-dropping effect of their live performances Say Revenge! will outdo themselves on the next album.