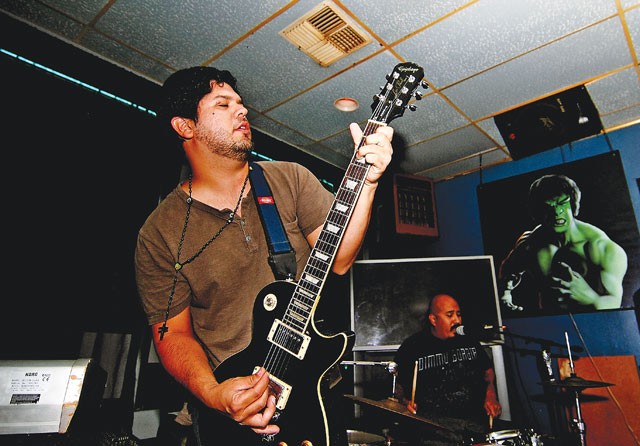 With his short-haired dome, thick mustache, and gruff demeanor, Fred “Mota” Rodríguez looks like he should be hurling beer-soaked insults at the Cowboys on a Sunday afternoon instead of playing suicide songs on a Friday night. That is, he doesn’t look like a typical New Waver. Of course, he also claims membership to Blood Spill (1986-1990), which he describes as SA’s first black metal outfit (a portion of the demo tape lives on YouTube; search “Playground of Death”). Yet wearing athletic shorts, sporty T-shirt, and cross-trainers, Rodríguez’s new quartet’s maiden gig took place Friday at The Mix.

The band’s press release claimed they would “destroy” the club. While The Mix is still standing, it’s definitely leaning with eyes downcast and hands in pockets. Rodríguez led from behind the drum kit, pounding out songs of heartbreak and disappointment and singing in a voice somewhere between the Cure’s Robert Smith and Depeche Mode’s Dave Gahan. He was flanked by “Porko” Joe Pérez on bass, “Hollywood” Vincent García on guitar, and Bonnie Aguilar on keys. The group brought the sentimental pain in high fashion, regularly deviating from the New Wave mold.

Rodríguez howled over Aguilar’s Gaelic keyboard-generated strings and a Sabbath-like groove on opener “Alone and Drifting.” Dreamy ballad “Lies and Misery” showcased the give-and-take between García and Pérez. García took long, Edge-like notes in the solos while Pérez offered some busy, almost funky playing. Sight 4 Sore Eyes make claims of space rock on their ReverbNation page. They made good on the smoldering Floyd-esque “Sunshine Through the Window,” with Aguilar leading on the Rhodes and García and Rodríguez both losing themselves on their respective instruments. Rodríguez described their closer “A Gift for the Lizard” as “the lost Doors song.” The cut featured a beatnik boogie and swirling chorus (“Fuck me baby, all night long”) before Rodríguez screamed, “I am the cockroach king! I can do anything!”

Rodríguez’ surliness was a stark contrast to what he described between songs as his “beautiful music,” but it made the Sight 4 Sore Eyes no less affecting. Perhaps, more so.