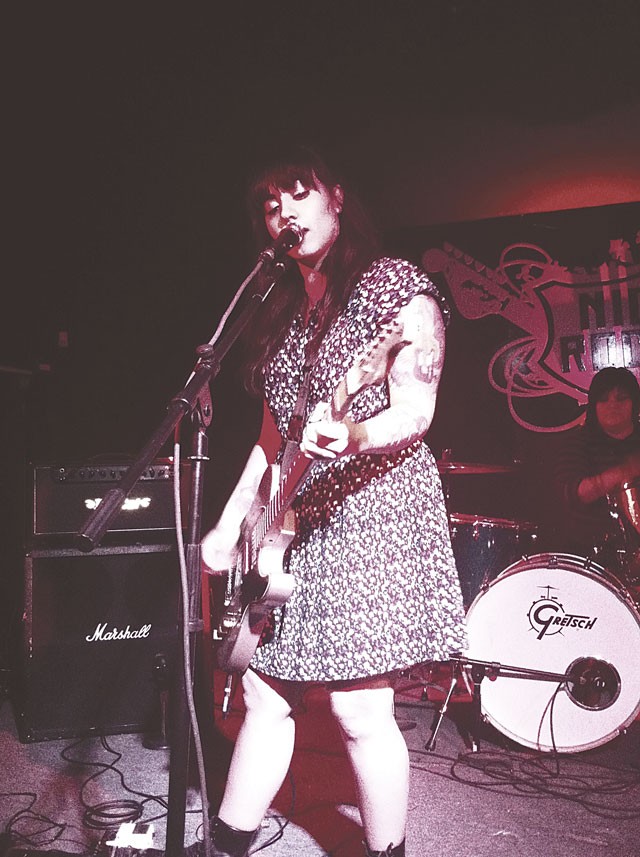 “Sylvia’s Radio” is one of the names used by Girl in a Coma in the past. Fortunately, tons of fan mail made them reconsider and cleave to the GIAC moniker, but the band still uses it from time to time whenever they have a special mission. This time, the occasion was preparing for their October 29 show at the Pearl, when the trio will officially present their superb new album, Exits & All The Rest.

“We’re going to play everything we’ll play on the 29th to see how it goes,” said bassist Jenn Alva minutes before going onstage at Nightrocker Live. “Afterwards, I’ll ask the people what they thought. As far as we’re concerned, the new songs feel good.”

Before this show, they had only played three songs from the new album publicly, and that during their recent opening slot touring with the Go-Go’s. Yet they sounded as if they had been playing them forever.

At first listen, I felt the album sounded like a gem meant to be listened to from beginning to end. Except for the poppish “Smart,” there were no clear-cut singles — the whole album felt like the single, which is not a bad thing. But live, those same songs sounded like potential hits. They opened with “One Eyed Fool,” showing Nina’s right hand is now as confident as her voice. Jenn could’ve used a little more mic for her harmonies, and Phanie, by concentrating on her playing above theatrics, showed herself to be the anti-Dave Grohl (her big drum hero). That first song set the tone for the whole night: three girls rocking the house without any help besides conviction and water. (Welcome to new Girl in a Coma: no booze needed.)

One by one, the new songs reintroduced themselves. “Sly,” one of the best new songs, starts with Nina — consciously or not — channeling Jeff Buckley during a trip to India. “Smart” (the song Phanie and Jenn liked the least in the demo stages before Nina changed the lyrics) succumbed to that early juju when Nina broke a string. Recovering, Nina took charge in the opening riff of “She Had a Plan,” with Jenn helping her with the album’s overdubs. A few years ago, a Nina guitar intro would’ve sounded as if she had just picked up the guitar, but she’s all there now. And what to say about her celebrated voice? Nina is from another planet. She just opens her mouth and magic happens.

A furious cover of the Beatles’ “While My Guitar Gently Weeps” was the best from the older songs, but the night’s best assurance was leaving knowing that Exits is an album that rocks in a live setting. Go to the Pearl’s free show on Saturday, and see for yourself.