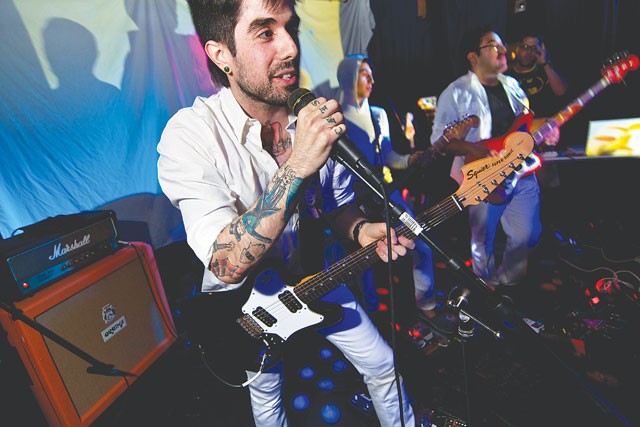 “Something just died, no clue,” said Richard Garcia, one of two guitarists for heavy math rockers Yes, Inferno, after their album release set on Friday, June 17, at Limelight.

Richard, always one to banter since his earliest days as solo artist Romeo Golf, had to run his mouth a little extra after his pedal board quit two songs into the set. Neither “Ellen Page” or “Midnight Murder Highway” were sounding too good. Bassist Chris Saenz, drummer Ernst Bredvad, guitarist Cisco Garcia, and Richard played both tracks as tightly as on their new self-titled EP (check out the Current’s review in next week’s issue), but the lower register was clouded by a buzzing that didn’t sound intentional. Then, Richard couldn’t get his pedal board to push a signal between songs, which presented an opening for a certain Current reporter to razz him over cutting his tip-frosted mullet.

“Don’t even,” he retorted. “I fucking miss that haircut.”

Finally, Richard plugged his guitar directly into the amp and pulled off a solid set with his bandmates. They played their self-titled EP straight through, keeping the banter light to balance their dark instrumental rock. The epic combo of “Something Along the Skyline” and “Tunnels in London” is where the band locked in and hit Limelight hard. Both tracks do a similar “slow beginning, epic ending” dance, but avoided redundancy through being played loud and in person.

“Tunnels” became the defining moment of the night, its soaring theme creating synergy between crowd and band that could be seen and heard. Yes, Inferno also pulled a fast one when they played “Ghost XO” beyond the disappointingly short running time on record and even threw in an interpolation of the guitar jam from Thin Lizzy’s “The Boys are Back in Town” between songs later.

But the band also brought out some new tunes, written since they recorded their debut. “The Art of Our Mistakes,” “Vanity Kills in Technicolor,” and “Space Cadet” were delivered snare-drum tight, but felt too familiar in the wake of their EP material. The band’s fans didn’t seem to care, but I couldn’t help observing Richard’s allusions to metal and classic rock. Yes, Inferno play their heavy math rock well, but the incorporation of other styles would be a welcome change to their mold, especially as their instrumental playing requires one to pay attention to those who are usually the supporting players. Something to think about before recording the full length.