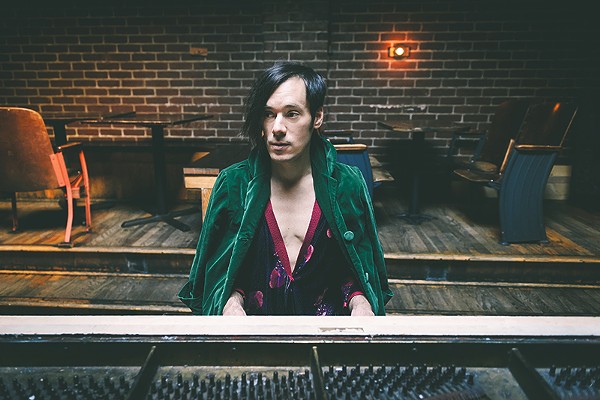 Back in April of this year, of Montreal released their first live record, Snare Lustrous Doomings. For a band that's put out roughly two dozen studio albums, cycled through an NBA roster's worth of band members, and toured the world for two decades, this seems like something of an anomaly. But then live albums have never been a particular focus for bandleader Kevin Barnes. "It was the label's idea really," said Barnes, speaking from his house in Athens, GA. "As fun as the live shows are, I don't personally listen back to them. So I don't know how good our live record is."

It's good — very good in fact. Split between two shows last year in San Francisco and Portland, Doomings features one of the band's fiercest ever line-ups, a funk-affected five-piece that tears through band classics, covers and recent tracks with equal impact.

But the record is missing something; which might explain Barnes' lack of enthusiasm.

"The visual element just isn't there. Like even when we brought the show recording to the label, they were like 'Can you take out that canned laughter?' Of course, they couldn't see that during that part of the song around the middle of the second verse, three people in weird costumes come out and start performing this, like, vaudeville scene. Then lights change and everything goes insane for a second. To just listen to it, you're definitely missing all of that."

Like fellow freaks The Flaming Lips, of Montreal's concerts take on the feel of a rolling psychedelic circus, albeit with a little more lo-fi spontaneity.

"Things are just happening in random places," said Barnes. "It's not really set up like these big pop acts where everything works together, and the lights all hit right at this specific moment in the chorus," Barnes explained. "My brother, who plans all the live shows, isn't a musician. He wouldn't really know how to time something to the chorus, so often it's really awkward. And I love awkward."

Beyond charmingly awkward, 'ambitious' might be the most consistent element of of Montreal's live show. The band has toured with a horse, which Barnes has sang from atop of. Band members run through costume changes like it's the Oscars. Barnes ended tours during the Paralytic Stalks tour by crucifying himself. So what does the band have set for their show at UtopiaFest this weekend?

"The staging and production is going to be pretty epic," Barnes shared. "We've got three performance artists and a really immersive psychedelic video show with all the animation and projections. I never really know exactly what it's gonna be until we hit the road, though."