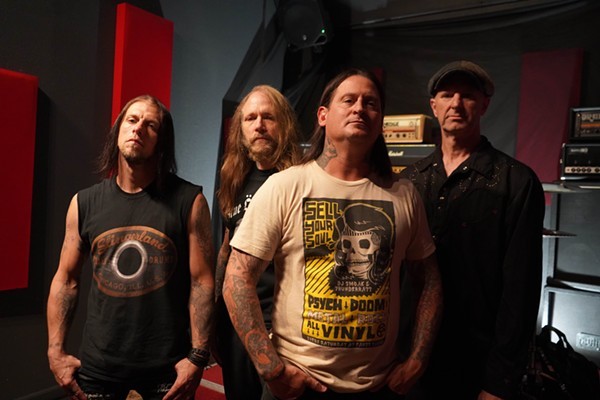 But for those would rather enjoy tunes that don't vibrate your ribcage, other options abound. Whether your tastes run to trad-jazz, Mexican divas or fast-rising country singer-songwriters, SA live music venues have got ya covered.

Dirty River Jazz Band
With the word “jazz” appearing in both the name of the band and the venue, you know what you’re getting. The Dirty River Jazz Band came together at Seguin’s Texas Lutheran University after the members caught a performance of late jazz traditionalist Jim Cullum, who eventually became a mentor. They recorded their album Live & Krazy at Jazz, Tx. in 2019, so the band has a history with the club. With a diverse instrumentation including both tuba and banjo and the ranks loaded with music teachers, expect Dirty River Jazz Band to pull it off with style and aplomb. $26, 7:30 p.m., Jazz, Tx., 312 Pearl Parkway, Bldg. 6, (210) 332-9386, jazztx.com. — Mike McMahan

Brokenboard 15 Year Anniversary Bash
Concert promoter Brokenboard Productions has spent a tireless decade and a half bringing heavy music acts to the Alamo City, and now it’s celebrating its career of evil with a three-day festival at St. Mary’s Strip live music stalwart the Mix. In keeping with Brokenboard’s musical specialties, expect showcases for punk, extreme metal and doom spread out over three separate nights. Friday’s punk bill will include veteran Austin troublemakers the Skatenigs with Houston’s The Cops and SA’s Cutthroats. Saturday’s extreme metal lineup will raise the horns for Houston-based blasphemers Morbosidad along with San Antonio’s Hod and Black Jackal. Sunday’s doom-focused closer will feature a trio of downtuned Alamo City acts: Thunder Horse, Maneaters of Tsavo and Hotzi. Earplugs may be a good idea. You know, just in case you’d one day like to hear what your grandchildren are saying to you. $15-$18 each night or $50 three-day passes, 10 p.m., The Mix, 2434 N. St. Mary’s St., (210) 735-1313, themixsa.com. — Sanford Nowlin

Amy Winehouse Tribute
July 23 will mark the 10-year anniversary of iconic singer Amy Winehouse’s death, so Bang Bang will mark the occasion with a celebration of her music. Both DJ The General and DJ El Gato Scott Kimrey will be on hand to spin the tunes. If you’re saying “no, no, no” to rehab, what better place to pay your respects than a bar? Free, 10 p.m., Bang Bang Bar, 119 El Mio Dr., (210) 320-1187, bangbangbartx.com. — MM

Divas
The Divas are ready to serve up songs including "Tu muñeca," "Aún lo amo" and "Corazón de Piedra." If you don’t follow the Spanish, expect a lot of songs about love. Individually, Mexican singers Lucía Méndez, Dulce, Rocío Banquells and Manoella Torres all had successful music and television careers in during the’80s, which makes their group moniker right on target. $54.50-$124.50, 8:30 p.m., Majestic Theatre, 224 E. Houston St., (210) 226-5700, majesticempire.com. — Brianna Espinoza

Sunny Sweeney
Though she spent her formative years in East Texas, country singer-songwriter Sweeney skipped off to NYC to really get it going. Texans are a forgiving bunch, though, and we’re glad she’s back after her hard work to get her songs out there. Her latest release, 2020’s Recorded Live at The Machine Shop Recording Studio follows 2017’s favorably reviewed Trophy. A real selling point is that Sweeny has dogs named Dolly, Nash and Merle. Not convinced? Her official merch includes a shirt emblazoned with “Drinks Well with Others.” $15, 7:30 p.m., John T. Floore’s Country Store, 14492 Old Bandera Road, (210) 695-8827, liveatfloores.com. — MM

Roller Disco Glam Party
If you like the sound of an evening at Studio 54, better lace up those skates. Promising a disco soundtrack — natch — but also “disco queen MCs, special roller disco performances, a pop-up glam room and a best dressed contest,” the Rollercade is pulling out all the stops to take attendees back to the golden age of groove. For those wavering, it’s worth keeping in mind that proceeds from the evening go to The Good Good Collective, which offers art education programs aimed at fostering the creativity of Latinx youth. Keep the beat alive. $18-$150, 8:30 p.m., Rollercade, 223 Recoleta Road, (210) 826-6361, therollercade.com. — MM