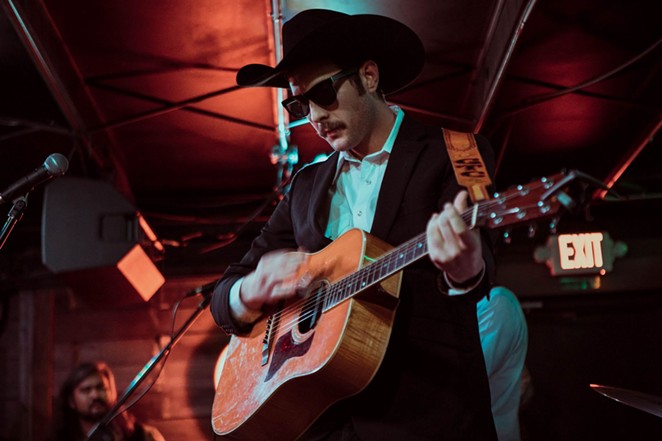 Garrett T. Capps, one of the beacons of San Antonio's alt-country scene, is holding a star-studded release party this weekend for a brand new album.

While there's much to love about that, we recognize that Capps' sideways take on twang may not be everyone's can of Lone Star. Good thing live music this week also includes a mess of other options, ranging from retro-R&B heavyweight Leon Bridges to folk-and-roller Esmé Patterson.

Harry Styles
After getting his start as “the cutest one” in boy-pop band One Direction, Styles eventually grew into an acclaimed solo singer adored by girls, boys and everyone in-between. On this previously postponed tour, Styles rolls off his 2019 album Fine Line which includes nods to the psychedelic, progressive sounds of the ’60s and ’70s. We’re guessing there will be plenty of screaming from both new teenage fans and those that have grown up to become adult superfans. $453-$698, 8 p.m., AT&T Center, 1 AT&T Center Parkway, (210) 444-5000, attcenter.com. — Brianna Espinoza

Garrett T. Capps, Santiago Jimenez Jr. and More
Even when planning a record-release show, space cowboy Garrett T. Capps continues to show his appreciation for all things San Antonio. How else to explain the inspired lineup for the release of his latest album I Love San Antone? After all, the stacked bill includes not just Capps and his band but bona fide conjunto legend Santiago Jimenez Jr., twangy garage rockers Mitch Webb & the Swindles and country singer and actual rodeo queen Madelyn Victoria. Capps is billing the free show as an “album release fiesta,” and we’d be hard pressed to disagree. Also, note that the show has been relocated to the Paper Tiger to accommodate what’s likely to be a big turnout. Free, 6 p.m., Paper Tiger, 2410 N. St. Mary’s St., papertigersatx.com. — Sanford Nowlin

Leon Bridges
Fort Worth-raised, Grammy-nominated singer, songwriter, record producer and guitarist Leon Bridges has emerged as one of today’s most compelling R&B artists. Bridges’ powerful yet gentle voice allows him to carry the torch for the soul sounds of the ’50s and ’60s into modern times. $175-$348, 8 p.m., Aztec Theatre, 104 N. St. Mary’s St., (210) 812-4355, theaztectheatre.com. — BE