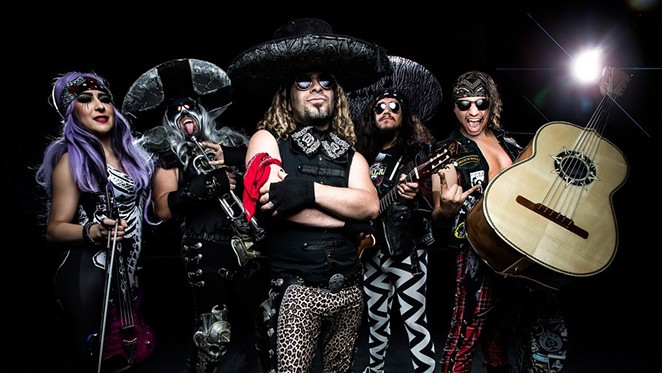 If you like a good gimmick to go with your live music, this week you're in luck.

If those options sound heavy on the schtick for your liking, fear not. Guitar virtuoso Joe Bonamassa, pop-country singer Kane Brown and rapper 42 Dugg are among the acts taking San Antonio stages that are, um, a tad lighter on the artifice.

Mac Sabbath
If you’re a fan of heavy metal, fast food or parodies, pencil this one onto your calendar. All three? Write it in with permanent marker. The four-piece band Mac Sabbath play what they refer to as “drive-thru metal,” and they perform in total anonymity since they take the stage clad in ’80s-era McDonald’s character garb. Ozzy Osbourne himself has even expressed his respect for the talent of the LA quartet.” $17, 7 p.m., Paper Tiger, 2410 N. St. Mary’s St., papertigersatx.com. — Enrique Bonilla

Metalachi
Nothing beats the oddball combination of metal and mariachi that constitutes both this band’s schtick and its name. The group brings all the metalheads from the barrio together when they perform mariachi versions of famous headbanging songs. Of course, the vatos must stop in San Antonio since it’s both the Heavy Metal Capital of the World and a city steeped in Mexican cultura. $10-$15, 8 p.m., Paper Tiger, 2410 N. St. Mary’s St., papertigersatx.com. — EB

Ayron Jones, Hounds
You may have heard Ayron Jones’ name, but have you heard the music? He describes his own sound as “if Michael Jackson played guitar like Jimi Hendrix in Kurt Cobain’s band.” Which is a fair enough description. Jones is touring behind his third album, his first for a major label, in this case the Big Machine Label Group. St. Louis alt-rock outfit Hounds open the show. $16, 8p.m., Rock Box, 1223 E. Houston St., (210) 255-3833, facebook.com/therockboxsatx. — EB

David Beck’s Tejano Weekend
Beck’s specialty is well-executed Tejano sung in English. Sounds readymade for a night of dancing and drinking. And your auntie can even come along and bring that new boyfriend of hers that doesn’t understand Spanish. $5, 10 p.m., Blue Bonnet Palace, 17630 Lookout Road, (210) 651-6702, bluebonnetpalace.com. — EB

Joe Bonamassa
Blues guitarist Joe Bonamassa was practically born into his art form. As a kid, he was mentored by a legendary guitarist Danny Gatton, and by the ripe old age of 12 he’d opened for a string of performances by B.B. King. Now in his 40s, Bonamassa is still wowing audiences with his searing solos and huge collection of vintage guitars and amps. $83.50-$599, 8 p.m., Majestic Theatre, 224 E. Houston St., (210) 226-5700, majesticempire.com. — Brianna Espinoza

Kane Brown
Kane Brown — aka That Country-Pop Singer Who Uses Way Too Many Clap Beats in the Background of His Singles — is heading this way to treat SA to songs about love and having a good time on the weekend. Whether or not that’s your thing, the biracial Brown has helped break the color barrier in C&W and continues to gain more recognition and success with each release. $40.50-$389.50, 7 p.m., AT&T Center, 1 AT&T Center Parkway, (210) 444-5000, attcenter.com. — BE

42 Dugg
Don’t get your hopes up, sci-fi fans. This hip-hopper has nothing to do with that all-important number from The Hitchhiker’s Guide to The Galaxy. In fact, the moniker is pronounced “four-two Dugg.” Name origins aside, the rapper’s star has been shining brightly of late. He was named R&B/Hip-Hop Rookie of the Month by Billboard in May. He got his start writing slam poetry with the infamous Lil Baby, after the two became friendly following one of 42 Dugg’s prison stints. $35-$49.50, 8 p.m., Aztec Theatre, 104 N. St. Mary’s, theaztectheatre.com. — Mike McMahan

Black Stone Cherry
These Kentucky Southern rockers, who recently celebrated their 20th anniversary as a band, have a radio-friendly sound that earned them opening slots with Def Leppard and Nickelback. Lest you pigeonhole them, though, their 2016 single “The Rambler” featured Billy Ray Cyrus. Cyrus was already in his post-mullet era by then, unfortunately, but his presence on a single from aspiring arena rockers speaks to the diverse appeal they’re striving for. $25-$150, 7 p.m., Sam’s Burger Joint, 330 E. Grayson St., (210) 223-2830, samsburgerjoint.com. — MM