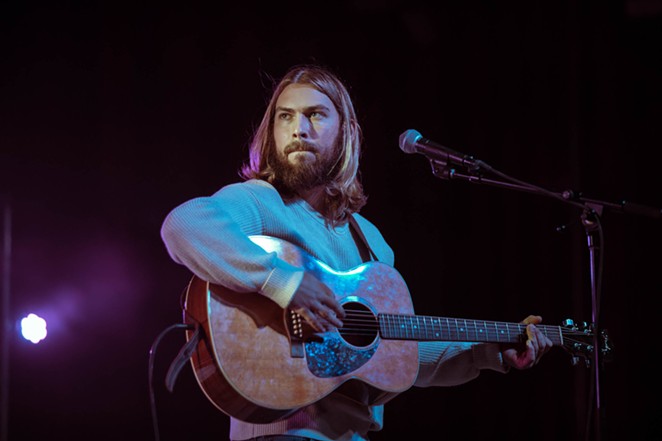 Naturally, Saturday's album release show from local avant-metal trio The Grasshopper Lies Heavy is a prime choice, but those who crave quieter entertainment can also find a homegrown singer-songwriter, a fleet-fingered blues bassist and purveyors of country soul doing their things as well.

Let's run down some of the options.

Cooper Greenberg
A singer-songwriter who cites an array of influences from Radiohead to Sturgill Simpson, Greenberg has steadily built a regional following over the past few years. He has been featured on Texas Public Radio and released a new album called Silverbelly earlier this month. Free, 8:30 p.m., The Rustic, 17619 La Cantera Parkway, Suite 204, (210) 245-7500, therustic.com. — Mike McMahan

The Professor UnderFunk
The Professor, who also answers to Cecil Yancy, lives up to his name with a sound that’s rooted in the blues and his limber bass lines. He pairs his instrumental prowess with a baritone voice and all the funk you can handle. Free, 7 p.m., Sanchos Cantina y Cocina, 628 Jackson St., (210) 320-1840, sanchosmx.com. — BE

Prophets and Outlaws
Ever heard of country soul? Well, now you have thanks to this outfit, which uses its emotional sound to tug at listeners’ hearts. The group even started the Little Bit of Love Foundation, which donates 100% of the proceeds from the band’s song "Little Bit of Love" to the North Texas Food Bank. $15, 8 p.m., Gruene Hall, 1281 Gruene Road, New Braunfels, (830) 606-1281, gruenehall.com. — BE

Kash’d Out, Cydeways, Bonzai
The appropriately named Way Too High for This tour is rolling into Saytown with its reggae-rock vibes. Orlando, Florida-based headliners Kash’d Out has made a splash on both the Billboard and iTunes charts, and it’s shared the stage with national acts including Less Than Jake. Cydeways hail from Santa Barbara, California, and recently released the singles “California Castaway” and “We Won’t Run.” $15-$18, 8 p.m., Vibes Underground, 1223 E. Houston St., (210) 255-3833, eventbrite.com. — MM