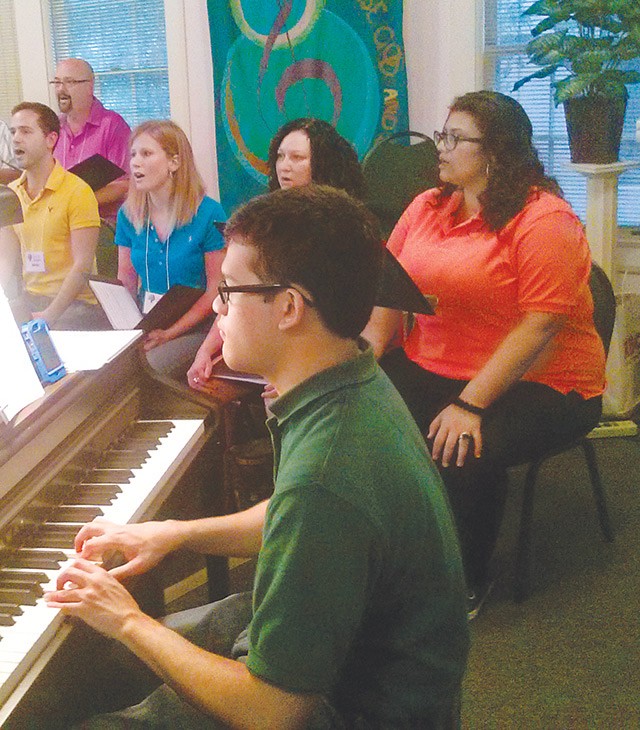 When Ron Casola hands me a business card for the Live Oak Singers, San Antonio’s latest LGBT chorus, the logo of a multicolored tree trunk leaning demurely into its right hip above the frisky font of his name doesn’t go unnoticed. Hoping to fill the artistic void left by the now dissolved Alamo City Men’s Chorale, Casola appears to be on a mission to usher in a new era of local appreciation for the choral arts.

An antecedent figure to the choral community in Phoenix, Casola moved to San Antonio in January after an Alzheimer’s diagnosis brought him to live with his nephew, the son of his “Bible thumping” twin brother. With a robust enthusiasm, he explains how his storytelling presentation as a spokesperson for the National Alzheimer’s Association is, in part, through song. “A lot of people think that we’re all crawled up in some corner in diapers at a nursing home,” says Casola, now 66.

Keeping in step with the age of gender inclusivity, the Live Oak Singers are not just a musically mixed SATB (soprano, alto, tenor, bass) choir. “It’s also LGBT and family,” he says.

This familial attitude may have taken root when he coordinated a chorus comprised of Valley of the Sun-area breast cancer survivors. The experience brought him close to his singers. In fact, some of the women felt so comfortable as to “hold up their blouses to show him their scars.”

It’s an ongoing aspiration of his that through their musical ventures, which promise “pop, Broadway and some madrigal,” the Live Oak Singers will be able to help audiences “escape the stress of their everyday lives.” Casola leads the 28-member group through a two-minute meditation session every rehearsal. “You would not believe what a difference that makes,” he says.

Casola also plans to part ways with the James Bond tuxedo look, a chorus tradition. “[This] chorus wears all bright, solid polo shirts, bright-colored tennis shoes with khaki slacks and wild socks … Even though we’ll do serious music, I don’t know that we’ll ever wear tuxedos,” he says.

Another new facet are the fresh faces. According to Casola, the chorus sent out emails early in the year to the former members of the ACMC, the all-male group that lasted 26 years, but just “three or four” have signed on. “[Ours] is a mixed chorus,” he says. “Some guys just don’t like women and don’t want them in their lives. One of them told me that. He may not be the only one.” Ever the optimist, he initiated plan B and hit the karaoke bars to recruit voices.

Casola says when they came up with the name, no one informed him that there was a Live Oak community nearby. “It was too late to change [it],” he says with a chuckle. “Besides, I think it has a ring to it.”

The first of their three yearly concerts is scheduled for mid-December—tuxedos not included.