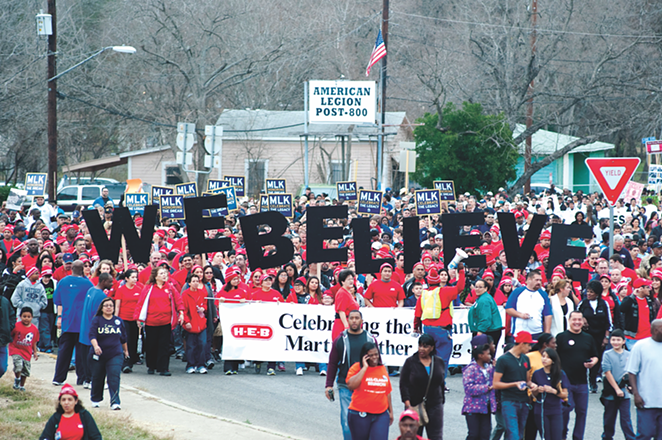 Editor’s note: Current Events is a column of opinion, insight and analysis.

At San Antonio’s annual Martin Luther King Day march, it’s common to see employees from H-E-B, Valero Energy and other locally based companies clustered together wearing T-shirts bearing their company logos, along with quotes from the civil rights leader.

In January of last year, USAA even posted a moving video of its workers discussing the importance of keeping King’s dream alive.

Given King’s struggle to ensure Black voters had equal access to the ballot box, it’s puzzling to see those same private employers sit on the sidelines as a pair of discriminatory anti-voting measures advance in the Texas House and Senate.

Those bills, championed by Texas Gov. Greg Abbott and Lt. Gov. Dan Patrick, both Republicans, are part of a wave of GOP-backed legislation in statehouses across the country vying to undo Democrats’ recent gains in mobilizing minority voters.

Voting-rights groups have decried the Texas bills as discriminatory, adding that they’re also likely to spur voter intimidation. Among other things, the proposals would limit voting hours, give partisan poll watchers more access to voting sites, and make it illegal for local elections officials to proactively send vote-by-mail applications to residents who qualify for them.

They’re proposals that King, if he were still alive, would condemn and mobilize to halt.

After all, Congress passed the 1965 Voting Rights Act into law seven months after the civil rights leader initiated a campaign to pressure lawmakers to end voter disenfranchisement and intimidation.

The backers of Texas’ voting bills claim they’re not about turning people away from the polls. Instead, they argue, the measures are about “voting integrity” — preventing fraud. That’s because Abbott and Patrick are smart enough to understand that calling the bills what they are is bad publicity.

It’s the same tactic the pair used during the 2017 session when they pushed for Patrick’s so-called “bathroom bill,” which would have banned transgender people from using public facilities. They didn’t try to sell that proposal as a discriminatory slap at transgender Texans. Instead, they touted it as a matter of “public safety.”

Like the bathroom bill, the voter suppression measures now before the Lege are solutions in search of a problem — and bad ones at that.

In 2017, San Antonio businesses recognized the discriminatory nature of Patrick’s bathroom bill. They also understood the embarrassment, derision and economic damage it would bring the state of Texas. They also had the courage to decry it in loud and uncertain terms. The San Antonio Chamber of Commerce, Zachry Interests, Beldon Roofing, Broadway Bank and others told the governor and lawmakers to shut it down.

Now, the Texas Legislature is poised to pass legislation just as toxic — potentially more so — and bring serious economic damage to the state. Major League Baseball last week announced it’s moving the 2021 All-Star Game and 2021 draft out of Atlanta in response to a similar anti-voting law passed in Georgia. Texas, and San Antonio in particular, has plenty of exposure when it comes not just to sporting events but tourism and convention dollars.

One assumes executives at the Alamo City’s big employers are smart enough to realize this. Executives at Dallas-based American Airlines and Austin-based Dell Technologies both grasp the current reality. Last week, those companies issued statements clearly condemning Texas’ bills as a bid to disenfranchise voters.

Yet the silence from San Antonio’s business community is deafening. Given the pushback from AA and Dell, the question isn’t so much whether corporate leaders understand these bills’ anti-democratic intent, but whether they have the spine to say so publicly and mobilize to stop them.

Otherwise, bussing their employees to the MLK march in spiffy T-shirts bearing King’s words is a hollow, hypocritical gesture.