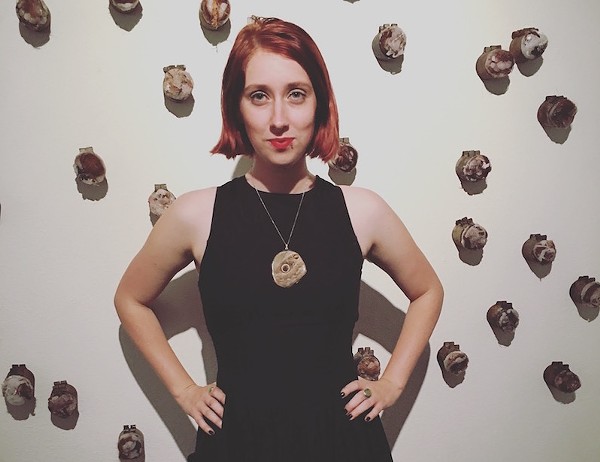 Donning a simple dress adorned with black lace and frill, Kelly Johnston waded through the babbling eddies of patrons viewing the opening of her debut solo exhibition, "Shored Fragments." Her presence exuded both a stalwart resolve and an immense relief; she stood in front of her glistening installation proudly, having accomplished the great feat unfolding before her.

“I did it,” she said, quietly triumphant.

An alumna of Trinity University and a former Director of Admission and Recruitment at the Southwest School of Art, Johnston presented her first independent exhibition at R Space, a contemporary art gallery in the South Flores Arts District.

With three showrooms enclosed by pristine walls painted a muted shade of off-white, the modest gallery nestled behind the sleek edifice of the Dorćol Distilling Company was established by Alex Rubio in 2011 with the intention of providing early exhibition experience to “unknown, undiscovered, emerging” artists.

“My mission is to mentor these developing artists … by assisting them with portfolio development, promotion, as well as curatorial support and critique by a professional artist,” said Rubio in an interview with the San Antonio Current.  “R Space presents and introduces this emerging talent to offer early exhibition experience at an alternative, artist-run space.”

Johnston was an ideal candidate for the opportunity to display her work at R Space. While her curriculum vitae boasted an extensive litany of joint showings and collaborative projects — on top of her notable involvement in Artpace’s 2015 Chalk It Up, she participated in this month’s Blue Star Red Dot — she lacked the proverbial foot in the door of the notoriously exclusive art world.

R Space, however, grants artists like Johnston the exhibition experience necessary for career advancement. As Rubio explained, the gallery’s purpose is to support creative minds in their commitment to being prolific in production and professional in presentation. In Johnston’s case, direct availability to the gallery itself played a pivotal role in the artistic process.

“Kelly Johnston’s work was an introduction in multi-media installation and sculpture,” said Rubio. “R Space is interested in promoting alternative medias including … very conceptually-based, site-specific work. The objects in Ms. Johnston’s work were produced at the gallery and installed by the artist, giving the artist an experimental space to be flexible, to adapt to the space of her installation as an experimental laboratory for the creation.”

“Over the course of installation, I learned how important it is to be organized … and not to underestimate how long it will take to create each piece,” said Johnston in an interview. “For this exhibition, I happened to discover the metal elements in each piece and purchased them, struck by their powerful presence. As I worked with the metal elements, I explored a variety of techniques and materials to create the finished pieces.”

The final upshot of this exploratory process, Johnston’s show is a nautically-inspired collection, borrowing its title from The Waste Land by T.S. Eliot. It consists of three pieces composed of idiosyncratic materials, including eroded debris found in the barnacle-like “Mar” and discarded human hair found in the eclectic totem, “Sevenbranched: The Human Machine Waits.”

“The metal elements paired with the human hair … convey the struggle of physical bodies living in a mechanical world,” said the artist. “Hair is an integral part of each piece because though highly personal and identifying … the moment it leaves our person is discarded and never thought about again.”

Suspended approximately ten feet from the gallery floor, “The Lady on the Rocks” is the thematic crux of the exhibition. Like the rest of the collection, this large scale sculpture is formed out of unusual materials that convey a whimsical sense of inappropriateness that both entrances and unnerves its viewer. Anchored beneath a shimmering veil of twine, the most striking element of the work’s structure is a triad of rusted parts that once belonged to a Ferris wheel. Serving as the installation’s base, the broken mechanical figures evoke a childlike nostalgia for the past in onlookers while simultaneously reminding them of time’s inevitable passage.

“I found what I believe to be seats from old Paratrooper riders … I was bumbling around Yeya’s Antiques and Oddities and came across them,” said Johnston. “Each metal element was rusting, speaking to how the decay of bodies and machines alike.”

While R Space is scheduled to host the closing reception of Johnston’s "Shored Fragments" on Saturday, May 28, the artist already anticipates a number of subsequent shows and looks forward to the growth of San Antonio’s local art scene.

“As an emerging artist, I would like to encourage others who are making this way in the field,” said Johnston. “There is always someone who wants to see you succeed.”