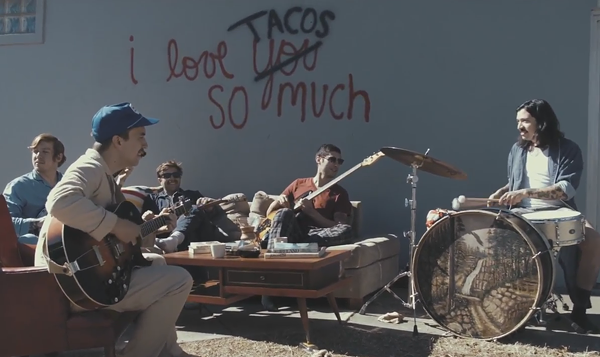 "And the sign said 'The words of the prophets are written on the subway walls and tenement halls ... '" And stucco building across from Tacoland!

The famed wall, reading "I love you so much ... sike, motherfucker, I love tacos!" (which is not exactly what it reads but the message is the same), has been all over the place lately. Interesting, considering it's an immovable stucco wall fixed in a permanent space. However, social media has been swamped with group shots and selfies from the recently-challenged home of the world's best breakfast tacos. Coincidentally, the wall was a response to the supposed war over best breakfast tacos (victor: everyone. They're breakfast tacos, people) and famous Austin graffiti stating "I Love You So Much."

San Anto/Austin country-emo quintet El Campo, who just released a 7" of the trifecta of singles "Skinny Kids," "Sloe-eyed" and "Spanish Revival," have shot a video at the taco wall, along with some really pathetic footage of them attempting to ball – Charlie Cruz, the group's bass player, looking like a severely inebriated Manu Ginobili, cutting through the defense just to throw up hideous air balls.

Scope out the wall and the (lack of) skills below. It's supes cute.

El Campo Skinny Kids I Love Tacos So Much Video