Local Graphic Designers Compete in the Fight for the Furious Pixel 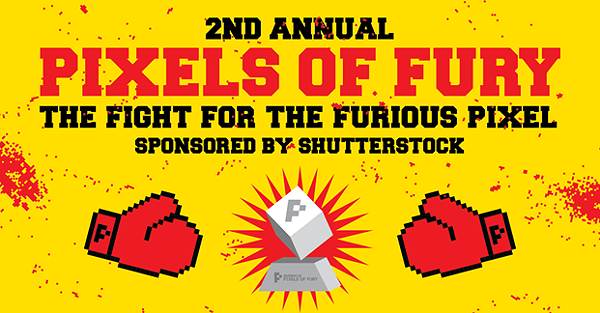 Let’s get ready to rumble, art geeks, because the 2nd Annual Pixels of Fury competition is coming to San Antonio this Friday, November 14.

Presented by AIGA and Shutterstock, Pixels of Fury is a traveling design contest in which local graphic designers compete to impress a live audience and a panel of creative judges. During the competition, eight San Antonio based artists will race through three 20-minute rounds to create the most attractive and inspiring posters using Photoshop and Shutterstock photos. To make it extra challenging, the artists are not allowed to use any outside images or hardware.

Each designer’s poster will be based on a specific topic but, during the final round of the contest, the last two artists standing will be forced to switch topics. Whoever creates the most visually appealing poster based on their competitor’s topic will win the coveted Furious Pixel trophy.

The event should be an especially good time for graphic artists—you will be able to watch as the eight competitors draw thumbnail sketches, click furiously through stock photos, scribble on drawing tablets, and expertly throw everything together on Photoshop which will be projected onto a big ol’ screen for everyone to see. You should start practicing your snooty, judgmental faces now in preparation for Friday night.

But hey, non-designers, don’t shy away from this event just because you are unfamiliar with the artists’ programs and techniques. You can drink and look at pretty pictures! Also, if you want to fit in, here are some phrases you can toss around while watching the competition: “Yuck! That gradient is so tacky!” or “What is up with that guy’s kerning?” or “We’re still using Helvetica? Seriously?”

Or you could always say something nice like, “Wow, that looks great.” But that’s up to you. I assume no responsibility for the reactions you will get when using these phrases.

The event will be held at Dorćol Distilling Co. Doors will open at 6:30 p.m,. and the first round will begin at 7:00 p.m. Tickets are $15 at the door. Because it is so close to the holidays, AIGA is encouraging everyone who attends Pixels of Fury to bring a donation for the San Antonio Food Bank. For every three food items you donate, you will receive one door prize ticket.

For more information on the event, visit sanantonio.aigia.org.