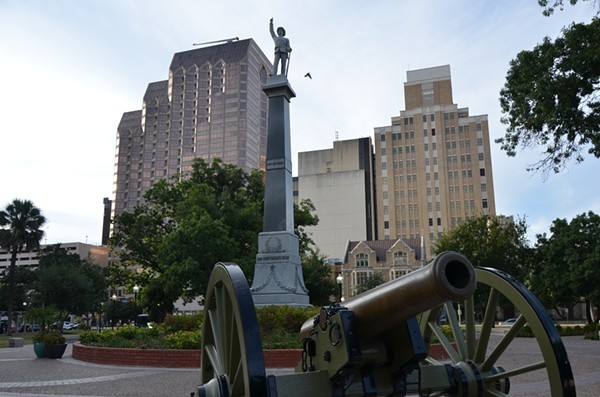 In the 1890s, a group of San Antonio women raised money through quilting bees and bake sales to erect a towering monument to the Confederacy in Travis Park. Beneath it, they buried a time capsule holding a folded Confederate flag and a Confederate soldier's Old Testament bible (along with other similar memorabilia).

More than a hundred years later, the San Antonio City Council voted to remove the monument from city property, placing it in storage until the city could settle on a new home. The August decision to remove a statue memorializing a racially-driven army has been touted as a civil rights victory in council chambers and advocacy groups throughout the city.

But the local chapter of the United Daughters of the Confederacy (descendants of those quilting women) are calling it thievery.

On Monday, the local United Daughters of the Confederacy chapter filed a federal lawsuit against the city for removing what the group believes to be their property. In the litigation, the local chapter, named the Albert Sidney Johnston chapter, argues that it never gave or donated the monument to the city.

The group specifically points to a 1899 City Council ordinance, where the city allegedly granted the UDC the right to use the land at the center of Travis Park for the monument. The city allegedly gave them the use of land beneath the statue (to bury the time capsule) "in perpetuity."

It's a similar lawsuit to one filed by the Sons of the Confederate Veterans shortly after the city approved the monument's removal. It was promptly dismissed by a federal judge for not having enough proof that the statue's removal would cause "irreparable harm" to the plaintiffs.

The complaint also alleges the city refused to meet with UDC members to discuss the removal or tell them where the statue is currently being stored — or if the time capsule is still underground.

"Since the removal, no UDC member has heard from the city about their monument," the lawsuit reads.

The city declined to comment on the lawsuit's allegations Thursday because it's "pending litigation." During the August council meeting on the monument's future, however, City Attorney Andy Segovia confirmed that Travis Park is most definitely city property.