Before creating the Emmy-winning web series The Russell Rush Haunted Tour, which, for the last eight years, has explored Texas' paranormal history, local radio DJ Russell Rush of Mix 96.1 initially considered himself a skeptic when it came to anything having to do with the supernatural. It wasn't until 2008 when he took a trip to an old, abandoned hospital in Yorktown, Texas with a local paranormal investigation team that Rush became a true believer.

"We were in a hallway and one of the paranormal investigators stopped and said, 'I think I just heard someone say Russell's name,'" Rush said. "I thought they were just trying to mess with me, but when I heard the recording myself, there was a whisper that says my name. After that, I went out and bought my own voice recorder and really got into it. Now, I've heard and seen too much not to believe."

In his new documentary 636, which is also technically part of Season 8 of his web series, Rush decided he wanted to dig deeper into a specific case and investigate the alleged murder that took place in Room 636 of the Gunter Hotel in downtown San Antonio, February 1965.

Armed with paranormal investigation equipment and with an FBI psychic and a team of paranormal investigators by his side, Rush and his crew set out to solve what he considers "the biggest unsolved mystery in San Antonio history" and to get to the truth of what happened in that hotel room 50 years ago.

The Current spoke to Rush last week about his new documentary and how the investigation is still affecting him today in a pretty disturbing way. 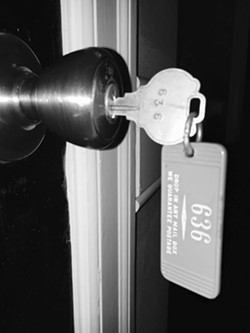 Have you always been interested in the paranormal?
I would always talk about ghost stories at another radio station I worked at. I would talk about all the urban legends during Halloween time. When I got to San Antonio, I realized the city was a very superstitious place. People talk about the legends here and build them up. I started going out with local paranormal groups who were [investigating] this stuff. It was around the time when TV shows like Ghost Hunters and Paranormal State were just getting started.

Why did you decide for Season 8 that you wanted to focus on only one story and make more of a documentary?
It differs every year. We actually did two locations this year, the Woodlawn Theater and the Gunter Hotel. When we talked to the Gunter, it became something that was bigger than what we would normally tackle in one episode. So, we decide to do it different than we had ever done before and focus on the story and the investigation. This year marks the 50th anniversary of the murder. We wanted to go in as deep as we possibly could and lose ourselves in it.

What was it about the Gunter Hotel story that resonated with you?
I've loved this case ever since I learned about it when I first moved to San Antonio. Who wouldn't be fascinated about an unsolved murder and a man who butchered [his victim]? It's not every day you hear that story. It's a story that almost tore apart the San Antonio Police Department. Police investigators and medical examiners and detectives were at odds. It was an absolute mess. Detective Frank Castillon, who led the investigation, has since died, but even in one of the last interviews he gave he said the [Gunter Hotel] case was the one case that he thought about his entire life. Not only did this man butcher a woman in that room, but then he killed himself. No one has any idea why or what happened in that room. This was 1965, so these things were unheard of. The most violent thing that would happen in San Antonio would be a bar room shooting over a pool game, not something you'd see in the movie Saw, and especially not in what was considered the finest hotel in town.

Was the purpose of the documentary to retell the story again or were you trying to solve the case?
Well, the San Antonio Police Department didn't close the case until 2010. Every now and then some private investigator would come through and look at the case and try and figure it out with updated technology who [the victim] was and maybe where the body was. Even with all the technology, they were never able to find one thing. Every little piece of forensics technology available has been tried. What they haven't tried is some sort of paranormal research. The haunting has been happening for 50 years. We thought there might be a way to use the knowledge we've been given over the years and communicate with someone to find information and solve the case. That's what we set out to do with the documentary.

I don't want you to spoil what you may or may not have found during the investigation, but were you happy with the journey you took and where it led your team?
I've been happy and a little disturbed by the journey, to be quite honest. With the paranormal, you sometimes involve yourself with things and you put yourself in the realm of places you really shouldn't be. For whatever reason, the man who is still in [Room 636] can still hold some weird power over you, as strange as it sounds. Throughout this journey, we've experienced that at times when we're not even at the hotel. That's a little bit scary and not something I've ever had to deal with before.

What experiences have you had with this entity outside of the hotel?
This entity has been able to control dreams. It was something we were warned about, but didn't really take seriously.

Can you explain more? Are you having nightmares?
This part is definitely personal. I kind of glazed over it in the documentary. This entity is always around and listening, so I'm not going to grant him any more power over me than he already has.

It sounds like this is something that is affecting your life right now. Are you worried?
I'm uneasy, I'll tell you that. I relive those moments [of the investigation] all the time. That's what really upsets me about it because he can still hold that power over every one of us when we go back and look at the footage. Whoever this person is, when he committed that act, was maybe one of the times of his life where he had so much power over someone and liked it. So now he likes to inflict that power on people. This has gone on for 50 years, which is the incredible thing.

I know the hotel is giving tours of the room for Halloween and you can still rent the room for the night. Would that be something you'd advise people to do if they were interested in experiencing something paranormal or do you think it's too dangerous?
I think they should. The average person is not going to get aggressive and antagonizing in the way you have to get when you're trying to get answers to solve a case. It's different if someone is just staying there for the thrill of it.

What do you hope people who see your new documentary learn about the paranormal?
By and large, San Antonio is prouder than anywhere else about its history and stories. You couldn't get me to pay attention in history class in school, but doing it this way I can! I think people should always keep an open mind. The Gunter certainly did with us when we told them we wanted to ghost hunt to solve the murder. It definitely was quite a ride.

636 will make its online debut Oct. 29 at therussellrushhauntedtour.com.